WordPress database error: [Table './sarvajan_ambedkar_org/wp_comments' is marked as crashed and should be repaired]
SELECT ID, COUNT( comment_ID ) AS ccount FROM wp_posts LEFT JOIN wp_comments ON ( comment_post_ID = ID AND comment_approved = '1') WHERE ID IN (1222) GROUP BY ID

LESSON â 24
We are shaped by our thoughts; we become what we think. When the mind is pure, joy follows like a shadow that never leaves.
– Buddha

Bas relief of the Jataka Tales

Jataka Tales chronicled the Bodhisatta’s journey from life to life to perfect the 10 Paramis (10 Great Virtues) before Buddhahood.

NCE upon a time a number of carpenters lived on a river bank near a large forest. Every day the carpenters went in boats to the forest to cut down the trees and make them into lumber.

One day while they were at work an Elephant came limping on three feet to them. He held up one foot and the carpenters saw that it was swollen and sore. Then the Elephant lay down and the men saw that there was a great splinter in the sore foot. They pulled it out and washed the sore carefully so that in a short time it would be well again.

He held up one foot and the carpenters saw that it was swollen and sore.

Thankful for the cure, the Elephant thought: “These carpenters have done so much for me, I must be useful to them.”

So after that the Elephant used to pull up trees for the carpenters. Sometimes when the trees were chopped down he would roll the logs down to the river. [70] Other times he brought their tools for them. And the carpenters used to feed him well morning, noon and night.

Now this Elephant had a son who was white all overâa beautiful, strong young one. Said the old Elephant to himself, “I will take my son to the place in the forest where I go to work each day so that he may learn to help the carpenters, for I am no longer young and strong.”

[71] So the old Elephant told his son how the carpenters had taken good care of him when he was badly hurt and took him to them. The white Elephant did [72] as his father told him to do and helped the carpenters and they fed him well.

The Elephant used to pull up trees for the carpenters.

When the work was done at night the young Elephant went to play in the river. The carpenters’ children played with him, in the water and on the bank. He liked to pick them up in his trunk and set them on the high branches of the trees and then let them climb down on his back.

With a last look at his playpmates the beautiful white Elephant went on with the king.

The king was proud of his new Elephant and took the best care of him as long as he lived. 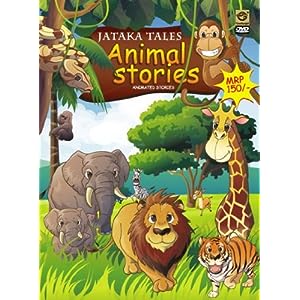 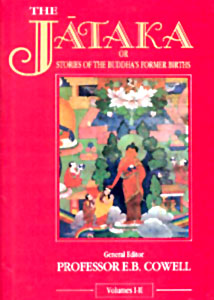 The Sutta Pitaka is the second part of the three-part Tripitaka, or (Three baskets [of texts]), the primary canon of Buddhism.The Sutta Pitaka contains more than 10,000 suttas delivered by the Buddha around the time of his 45 year teaching career. It also contains many additional suttas from members of the sangha. (sangha are groups of Buddhist monks)

There are five nikayas (collections) in the Sutta Pitaka. Looking at the nikayas you’ll notice Khuddaka Nikaya, which is “the division of short books”. This consists of 15 books (eighteen in the Burmese edition) with many Buddhist stories and verses inside. Book 10 of the Khuddaka Nikaya is the Jataka.

The JÄtaka is a collection of 547 stories, from the Sutta Pitaka division of the Tripitaka. Like the rest of the Tripitaka, the Jataka is in Pali, a north Indian dialect related to Sanskrit, which appears to be the literary language of early Buddhism. In ancient times the Pali Canon was written on thin slices of wood. The ‘pages’ are kept on top of each other by two thin sticks, which go through little holes in the scripture. The scripture is wrapped in cloth and stored inside the box Click thumbn

Jataka means “the story of a birth,” and the Jatakas are stories, in a mixture of prose and verse, of the 550 lives through which Gautama Buddha is said to have passed before his birth as Prince Siddhartha of the Sakya clan in northern India (563 B.C.)

In his earlier births Gautama is said to have been a Pali Bodhisatta (a being destined to acheive enlightenment), who in each life, born as an animal, person, or god, moves a step closer to perfect wisdom. The perfect wisdom being the attainment of Buddha (an “Enlightened Being”).

As the tale begins, you find the Buddha in conversation with his Buddhist monks or lay followers. A question from one of them will bring to the teacher’s mind a story of the past (that is, of one of his past lives as a Bodhisattva), which he then tells to illustrate a point of conduct. This is the main narrative, with its most dramatic moments highlighted by one or more stanza (gatha) spoken by a character or characters within it. At the end, the Buddha comments on his role as the Bodhisattva hero of the tale. The rebirth theme, together with the specifically Buddhist ideals of conduct expounded, mark the story as a Jataka. A deity who stands for wisdom. She holds an upraised knife in one hand, a skullcap in another. She stands in a dancing position

The 5 Abilities are Caused by Conditions!

The Experience of Change uproots Egoism!

Whether going along, above, across or back, wherever he goes in this world
let him carefully scrutinize the arising & ceasing of all constructed things…
Itivuttaka 120

Have a nice & noble day!

WordPress database error: [Table './sarvajan_ambedkar_org/wp_comments' is marked as crashed and should be repaired]
SELECT COUNT(comment_ID) FROM wp_comments WHERE comment_post_ID = 1222 AND comment_approved = '1';

WordPress database error: [Table './sarvajan_ambedkar_org/wp_comments' is marked as crashed and should be repaired]
SELECT COUNT(*) FROM wp_comments WHERE comment_post_ID = '1222' AND comment_approved = '1'