WordPress database error: [Table './sarvajan_ambedkar_org/wp_comments' is marked as crashed and should be repaired]
SELECT ID, COUNT( comment_ID ) AS ccount FROM wp_posts LEFT JOIN wp_comments ON ( comment_post_ID = ID AND comment_approved = '1') WHERE ID IN (1236) GROUP BY ID

If a man’s mind becomes pure, his surroundings will also become pure. To be idle is a short road to death and to be diligent is a way of life; foolish people are idle, wise people are diligent. - Buddha 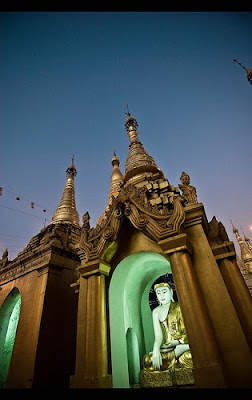 From The Dhamma Encyclopedia

Summed up, there are 4 noble individuals ariya-puggala:

According to the Abhidhamma, the supra-mundane path, or simply path magga, is a designation of the moment of entering into one of these 4 stages of Nobility with Nibbana being the object, produced by intuitional insight vipassana into the impermanence, misery and impersonality of existence, flashing forth and forever transforming one’s life and nature. By fruition phala is meant those moments of consciousness which follow immediately thereafter as the result of the path, and which in certain circumstances may repeat for innumerable times during the life-time.

I: Through the path of Stream-winning sotÄpatti-magga one becomes free whereas in realizing the fruition, one is freed from the first 3 mental chains samyojana, which bind beings to existence in the sense-sphere, to wit:

II: Through the path of Once-return sakadÄgÄmi-magga one becomes nearly freed from the 4th and 5th mental chains, to wit:

III: Through the path of Non-return anÄgÄmi-magga one becomes fully freed from the above-mentioned 5 lower mental chains.

IV: Through the path of Nobility arahatta-magga one furthermore becomes free from the 5 higher mental chains, to wit:

I: After the disappearance of the three mental chains, the Bhikkhu has won the stream to NibbÄna and is no more subject to rebirth in the lower worlds, is firmly established, bound for full enlightenment.

II: After the disappearance of the three mental chains and the reduction of greed, hatred and confusion, he will return only once more; and having once more returned to this world, he will put an end to suffering.

III: After the disappearance of the five mental chains he appears in a higher world, and there he reaches NibbÄna without ever returning from that world to the sense-sphere worlds.

B: The sevenfold grouping of the Noble Disciples is as follows:

This group of seven Noble Disciples is thus explained in Vis.M XXI, 73:

1-2: He who is filled with determination adhimokkha and, in considering the constructions as impermanent anicca, gains the ability of faith, he, at the moment of the path to Stream-winning A1 is called a faith-devotee saddhÄnusÄrÄ«; 2: at the seven higher stages A2-A8 he is called a faith-liberated one saddhÄ-vimutta.

3: He who is filled with tranquillity and, in considering the constructions as miserable dukkha, gains the ability of concentration, he in every respect is considered as a body-witness kÄya-sakkhÄ«.

4: He who after reaching the absorptions of the formless sphere has attained the highest fruition of Nobility, he is a both-ways-liberated one ubhato-bhÄga-vimutta.

5: He who is filled with understanding and, in considering the constructions as no-self anattÄ, gains the ability of understanding, he is at the moment of Stream-winning A1 a Dhamma-devotee dhammÄnusÄrÄ«,

WordPress database error: [Table './sarvajan_ambedkar_org/wp_comments' is marked as crashed and should be repaired]
SELECT COUNT(comment_ID) FROM wp_comments WHERE comment_post_ID = 1236 AND comment_approved = '1';

WordPress database error: [Table './sarvajan_ambedkar_org/wp_comments' is marked as crashed and should be repaired]
SELECT COUNT(*) FROM wp_comments WHERE comment_post_ID = '1236' AND comment_approved = '1'