WordPress database error: [Table './sarvajan_ambedkar_org/wp_comments' is marked as crashed and should be repaired]
SELECT ID, COUNT( comment_ID ) AS ccount FROM wp_posts LEFT JOIN wp_comments ON ( comment_post_ID = ID AND comment_approved = '1') WHERE ID IN (1786) GROUP BY ID

Dr
Ambedkar wanted SC/STs grow like banian tree,with a tremendous capacity to
regenerate,giving cool shade to needy, but never wanted SC/STs to become
ornamental shrubs (planted in Gamlas left at the mercy of owner for water and
sun light) with out roots in the fore courts of congress. It never can think of
an accidental banian seed sprouting in the heart lands of Indian polity.
Fortunately Ambedkarâs relentless fights, efforts and dreams has seen thelight
of the day in UP. Letâs sing and rejoice glory of our fore fathers. Jai Bheem!
Jai Kanshiram!

The untouchables along with Sarvajan Samaj including SC/ST/OBC/Minorities
and the poor Upper Castes will gift Multi Billion Budget amount after giving
the master key as Chief Minister for the fifth time on 06-02-2012 and as Prime
Minister in 2014 for equal distribution of wealth for Sarvajan Hithay Sarvajan Sukhay
i.e., for the welfare and happiness of the entire people as she has made
politics sacred by her highly promising best and meritorious governance
completing full 5 years term unlike the other CM of Congress, BJP and SP. 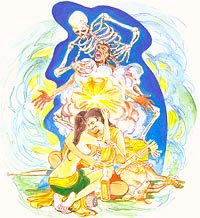 Verse 66. A Sinner Is
Oneâs Own Foe

Fools
of feeble wisdom fare
enemies to themselves,
making evil kamma
which is of bitter fruit.

Explanation:
Those unwise foolish people behave in a manner that is harmful

Verse
66: With themselves as their own enemies, fools lacking in intelligence, move
about doing evil deeds, which bear bitter fruits.

The
Story of Suppabuddha, the Leper

While
residing at the Jetavana monastery, the Buddha uttered Verse (66) of this book,
with reference to Suppabuddha, a leper.

Suppabuddha,
the leper, while sitting at the back of the crowd and listening attentively to
the discourse given by the Buddha, attained Sotapatti Fruition. When the crowd
had dispersed, he followed the Buddha to the monastery as he wished to tell the
Buddha about his attainment of Sotapatti Fruition. Sakka, king of the devas,
wishing to test the leper’s faith in the Buddha, the Dhamma and the Samgha, appeared
to him and said, “You are only a poor man, living on what you get by
begging, with no one to fall back on. I can give you immense wealth if you deny
the Buddha, the Dhamma and the Samgha and say that you have no use for
them.” To this, Suppabuddha replied. “I am certainly not a poor man,
with no one to rely on. I am a rich man; I possess the seven attributes which
the ariyas possess; I have faith (saddha), morality (sila), sense of shame to
do evil (hiri), sense of fear to do evil (ottappa), learning (sula), generosity
(caga) and knowledge (panna).

Then,
Sakka went to the Buddha ahead of Suppabuddha and related the conversation
between himself and Suppabuddha. To him the Buddha replied that it would not be
easy even for a hundred or a thousand Sakkas to coax Suppabuddha away from the
Buddha, the Dhamma and the Samgha. Soon after this, Suppabuddha arrived at the
monastery and reported to the Buddha about his attainment of Sotapatti
Fruition. On his way back from the Jetavana monastery, Suppabuddha was gored to
death by an infuriated cow, who, in fact, was an ogress assuming the form of a
cow. This ogress was none other than the prostitute who was killed by
Suppabuddha in one of his previous existences and who had vowed to have her
revenge on him.

Verse
66: With themselves as their own enemies, fools lacking in intelligence, move
about doing evil deeds, which bear bitter fruits.

WordPress database error: [Table './sarvajan_ambedkar_org/wp_comments' is marked as crashed and should be repaired]
SELECT COUNT(comment_ID) FROM wp_comments WHERE comment_post_ID = 1786 AND comment_approved = '1';

WordPress database error: [Table './sarvajan_ambedkar_org/wp_comments' is marked as crashed and should be repaired]
SELECT COUNT(*) FROM wp_comments WHERE comment_post_ID = '1786' AND comment_approved = '1'