WordPress database error: [Table './sarvajan_ambedkar_org/wp_comments' is marked as crashed and should be repaired]
SELECT ID, COUNT( comment_ID ) AS ccount FROM wp_posts LEFT JOIN wp_comments ON ( comment_post_ID = ID AND comment_approved = '1') WHERE ID IN (1803) GROUP BY ID 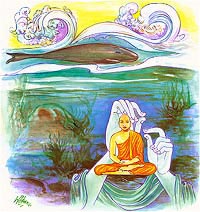 Verse 82. The Wise Are Happy

Even as a fathomless lake,
a lake so calm and clear,
so dhammas having heard
serene the wise become.

Explanation:
The
exceedingly deep oceans are tranquil, calm and are not agitated. In the same
way whose wise ones who listen to the word of the Buddha acquire deep awareness
and are extremely calm and tranquil.

Verse
82: Like a lake which is deep, clear and calm, the wise after listening to the
Teaching (Dhamma) become serene.

While
residing at the Jetavana monastery, the Buddha uttered Verse (82) of this book,
with reference to the mother of Kana, Kanamata.

Kanamata
was a devoted lay disciple of the Buddha. Her daughter Kana was married to a
man from another village. As Kana had been on a visit to her mother for some
time, her husband sent a message for her to come home. Her mother told her to
wait for one more day as she wanted to send along some sweetmeats with her for
her husband. The next day, Kanamata made some sweetmeats, but when four
bhikkhus stood at her door for alms, she offered some to them. The four bhikkhus
told other bhikkhus about the sweetmeats from Kanamata’s house and they also
came to stand at the door of Kanamata, as a devotee of the Buddha and his
disciples, offered her sweetmeats to the bhikkhus as they came in, one after
another. The result was that in the end there was none left for Kana and she
did not go home on that day. The same thing happened on the next two days; her
mother made some sweetmeats, the bhikkhus stood at her door, she offered her
sweetmeats to the bhikkhus, there was nothing left for her daughter to take
home, and her daughter did not go home. On the third day, for the third time,
her husband sent her a message, which was also an ultimatum stating that if she
failed to come home the next day, he would take another wife. But on the next
day also Kana was unable to go home because her mother offered all her
sweetmeats to the bhikkhus. Kana’s husband then took another wife and Kana
became very bitter towards the bhikkhus. She used to abuse all bhikkhus so much
so that the bhikkhus kept away from the house of Kanamata.

The
Buddha heard about Kana and went to the house of Kanamata; there Kanamata
offered him some rice gruel. After the meal, the Buddha sent for Kana and asked
her, “Did my bhikkhus take what was given them or what was not given
them ?” Kana answered that the bhikkhus had taken only what was given
them, and then added, “They were not in the wrong; only I was in the
wrong.” Thus, she owned up her fault and she also paid homage to the
Buddha. The Buddha then gave a discourse. At the end of the discourse, Kana
attained Sotapatti Fruition.

On the
way back to the monastery, the Buddha met King Pasenadi of Kosala. On being
told about Kana and her bitter attitude towards the bhikkhus, King Pasenadi
asked the Buddha whether he had been able to teach her the Dhamma and, make her
see the Truth (Dhamma). The Buddha replied, “Yes, I have taught her the
Dhamma, and I have also made her rich in her next existence.” Then the
king promised the Buddha that he would make Kana rich even in this existence.
The king then sent his men with a palanquin to fetch Kana. When she arrived,
the king announced to his ministers, “Whoever can keep my daughter Kana in
comfort may take her.” One of the ministers volunteered to adopt Kana as
his daughter, gave her all his wealth, and said to her, “You may give in
charity as much as you like.” Everyday, Kana made offerings to the
bhikkhus at the four city-gates. When told about Kana giving generously in
charity, the Buddha said, “Bhikkhus, the mind of Kana which was foggy
and muddled was made clear and calm by my words.”

on 25-02-2012 to create world record for the most
number of people swimming at the same time anywhere in the world between 05:30
and 06:30 PM and contributing to Rotary Internationalâs worldwide project to
eradicate polio.

WordPress database error: [Table './sarvajan_ambedkar_org/wp_comments' is marked as crashed and should be repaired]
SELECT COUNT(comment_ID) FROM wp_comments WHERE comment_post_ID = 1803 AND comment_approved = '1';

WordPress database error: [Table './sarvajan_ambedkar_org/wp_comments' is marked as crashed and should be repaired]
SELECT COUNT(*) FROM wp_comments WHERE comment_post_ID = '1803' AND comment_approved = '1'