WordPress database error: [Table './sarvajan_ambedkar_org/wp_comments' is marked as crashed and should be repaired]
SELECT ID, COUNT( comment_ID ) AS ccount FROM wp_posts LEFT JOIN wp_comments ON ( comment_post_ID = ID AND comment_approved = '1') WHERE ID IN (1776,1775) GROUP BY ID 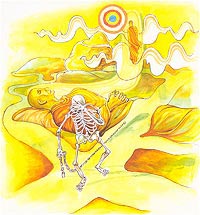 Of those with perfect virtue
who dwell in heedfulness,
freed by Final Knowledge
Mara cannot know their path.

Explanation: Of those noble one, who are perfect in behaviour,
living constantly alert, fully aware of the experience within, Mara, the evil
one, does not know their destiny. Mara can trace only the slothful dead. He
cannot trace those who have reach the Deathless.

Verse 57: Mara cannot find the path taken by those who are
endowed with virtue, who live mindfully and have been freed from moral
defilements by Right Knowledge.1

1. Arahats having eradicated moral defilements are no longer
subject to rebirths; so Mara, for all his power, cannot find out where such
arahats go after death. (The Commentary)

The Story of Thera Godhika

While residing at the Veluvana monastery, the Buddha uttered
Verse (57) of this book, with reference to Thera Godhika.

Thera Godhika was, on one occasion, diligently practising
Tranquillity and Insight Development, on a stone slab on the side of Isigili
mountain in Magadha. When he had achieved one-pointedness of the mind (jhana)
he became very ill; that impaired the effectiveness of his practice. In spite
of his sickness, he kept on striving hard; but every time he was making some
progress he was overcome by sickness. He was thus inflicted for six times.
Finally, he made up his mind to overcome all obstacles and attain arahatship
even if he were to die. So, without relaxing he continued to practise
diligently; in the end he decided to give up his life by cutting his throat; at
the point of death he attained arahatship.

When Mara learned that Thera Godhika had died, he tried to find
out where the thera was reborn but failed to find him. So, assuming the
likeness of a young man, Mara approached the Buddha and enquired where Thera
Godhika was. The Buddha replied to him, “It will be of no benefit to
you to learn of the destination of Thera Godhika; for having been freed of
moral defilements he became an arahat. One like you, Mara, for all your power
will not be able to find out where such arahats go after death.”

WordPress database error: [Table './sarvajan_ambedkar_org/wp_comments' is marked as crashed and should be repaired]
SELECT COUNT(comment_ID) FROM wp_comments WHERE comment_post_ID = 1776 AND comment_approved = '1';

WordPress database error: [Table './sarvajan_ambedkar_org/wp_comments' is marked as crashed and should be repaired]
SELECT COUNT(*) FROM wp_comments WHERE comment_post_ID = '1776' AND comment_approved = '1'

Ms
Mayawati’s Magic will certainly work and she will get 303 seats. for details
continue visiting 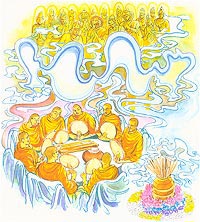 Faint is this fragrance
of lavender and sandalwood,
but fragrance of the virtuous
soars sublime amongst the gods.

Explanation: The
fragrance of lavender and sandalwood is quite slight. Why? Because it is
limited in this world. Such a fragrance can spread only on earth. This way it
is a very slight fragrance. But, the sweet smell of virtue is, in contrast,
supreme, because it spreads not only throughout the earth, it rises even to the
highest heavens.

Verse 56: The scents of
rhododendron and of sandal wood are very faint; but the scent (reputation) of
the virtuous is the strongest; it spreads even to the abodes of the deva.

The Story of Thera
Mahakassapa

While residing at the
Veluvana monastery in Rajagaha, the Buddha uttered Verse 56 of this book, with
reference to Thera Mahakassapa.

Arising from
nirodhasamapatti*, Thera Mahakassapa entered a poor section of the city of
Rajagaha for alms-food. His intention was to give a poor man an opportunity of
gaining great merit as a result of offering alms-food to one who had just come
out of nirodhasamapatti. Sakka, king of the devas, wishing to take the
opportunity of offering alms-food to Thera Mahakassapa, assumed the form of a
poor old weaver and came to Rajagaha with his wife Sujata in the form of an old
woman. Thera Mahakassapa stood at their door; the poor old weaver took the bowl
from the thera and filled up the bowl with rice and curry, and the delicious
smell of the curry spread throughout the city. Then it occurred to the thera
that this person must be no ordinary human being, and he came to realize that
this must be Sakka himself. Sakka admitted the fact and claimed that he too was
poor because he had had no opportunity of offering anything to anyone during
the time of the Buddhas. So saying, Sakka and his wife Sujata left the thera
after paying due respect to him.

The Buddha, from his monastery,
saw Sakka and Sujata leaving and told the bhikkhus about Sakka offering
alms-food to Thera Mahakassapa. The bhikkhus wondered how Sakka knew that Thera
Mahakassapa had just come out of nirodhasamapatti, and that it was the
right and auspicious time for him to make offerings to the thera. This question
was put up to the Buddha, and the Buddha answered, “Bhikkhus, the
reputation of a virtuous one as my son, Thera Mahakassapa, spreads far and
wide; it reaches even the deva world. On account of his good reputation, Sakka
himself has come to offer alms-food to him.”

New Delhi:
Cash-strapped Indian Oil Corporation (IOC) will have to pay over Rs 979 crore
in unpaid entry tax to Uttar Pradesh by 14 February after the Supreme Court
asked the company to deposit half of the unpaid liability in cash.

IOC had challenged the Uttar Pradesh government
decision to levy a $5.78 per barrel entry tax on crude oil the company imported
into the state for processing at its 8 million tonnes per annum refinery at
Mathura in the Allahabad High Court.

âThe High Court of Allahabad (on December 23,
2011) dismissed IOCâs writ petition and upheld the UP Entry Tax Act 2007,
whereby the state of Uttar Pradesh was entitled to levy entry tax on crude oil
brought into Mathura for refining in the Mathura refinery,â IOC said in a stock
market filing.

The apex court passed an interim order on 17
January 2012, staying the operation of the judgement of the Allahabad High
Court subject to âIOC depositing 50 percent of the accrued tax
liability/arrears under the UP Entry Tax Act, 2007, and furnish(ing) a Bank
Guarantee for the balance
amountâ within four weeks (by February 14), it said.

âThe amount so deposited/paid and the bank
guarantees furnished are, however, subject to the result of the appeal,â IOC
said, adding that the matter was being examined legally.

Company officials said IOC would be immediately
required to pay about Rs 979.17 crore, half of Rs 1,958.34 crore Entry Tax and
interest thereon demanded for the period from 1999-2000 to 2007-08. A bank
guarantee for the balance 50 percent would also have to be deposited by 14
February.

In addition, IOC has to file the tax returns from
April, 2008, till now within four weeks (by 15 February) and thereafter within
six weeks of the assessment, pay 50 percent of the assessed amount by cash
(estimated to be Rs 2,300 crore till November, 2011) and the balance 50 percent
through a bank guarantee.

The demand for interest shall, however, be extra
(estimated at Rs 1,478 crore for period up to March, 2012, of which half would
also payable by cash and the remaining by bank guarantee).

The official said IOCâs total liability toward
Entry Tax on crude oil and natural gas for 13 years is estimated at Rs 10,966
crore (including interest of Rs 2,098 crore).

The Allahabad High Court, in its 23 December 2011,
judgement, had observed that âlike all indirect taxes, the entry tax is passed
on and is ultimately paid by the consumerâ.

IOC, the official said, would take up the matter
with the oil ministry for allowing a suitable upward revision in prices of
petroleum products in Uttar Pradesh to make up for the burden of the levy for
the past years and also in future.

Whereas
Such types of activities against Uttar Pradesh by the central government ruling
castes who traditionally hate Ms Mayawati because of their dominating attitude
with vengence clearly shows that Ms Mayawati is treading the right path as told
by Dr Ambedkar. This will only strengthen her and her movement for equality,
social transformation and for the economic emancipation of the entire people
i.e., called as Sarvajan Hithay Sarvajan Sukhay.

Observers underline that the BJP was emerging as a party of tainted
politicians and this could harm it in the assembly elections.

Addressing a thinly-attended rally in Kushinagar’s Padrauna on
Monday, Kushwaha appealed to the OBC community to vote for the BJP. The former
family welfare and mining minister in the Mayawati-led BSP government is touted
by the rivals as “a symbol of corruption”. Kushwaha had joined the
BJP in the first week of January.

But it turned out to be a lie when BJP district
chief Akhilesh Mishra escorted Kushwaha to the dais at the Padrauna rally.
Kushwaha has already addressed more than two dozen public meetings in the
state.

Expelled Samajwadi Party MP Amar Singh on Wednesday took a pot-shot at his former
leader Mulayam Singh Yadav for announcing opening of
schools and hospitals in Mayawati’s
parks, saying the BSP chief
can make the same promise for Lohia
Park set up by him.

Addressing an
election meeting, he charged Mulayam
with giving protection to the corrupt and criminals and said that Yadav’s cycle, SP’s poll symbol, “had two
wheels (Mulayam and Amar Singh) of which one has been
removed and with one wheel left it would only grace a circus after the
polls”.

WordPress database error: [Table './sarvajan_ambedkar_org/wp_comments' is marked as crashed and should be repaired]
SELECT COUNT(comment_ID) FROM wp_comments WHERE comment_post_ID = 1775 AND comment_approved = '1';

WordPress database error: [Table './sarvajan_ambedkar_org/wp_comments' is marked as crashed and should be repaired]
SELECT COUNT(*) FROM wp_comments WHERE comment_post_ID = '1775' AND comment_approved = '1'