WordPress database error: [Table './sarvajan_ambedkar_org/wp_comments' is marked as crashed and should be repaired]
SELECT ID, COUNT( comment_ID ) AS ccount FROM wp_posts LEFT JOIN wp_comments ON ( comment_post_ID = ID AND comment_approved = '1') WHERE ID IN (1790) GROUP BY ID 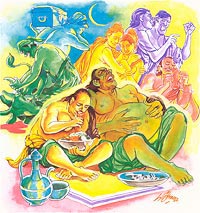 When
evil kammaâs immature
the fool thinks it is honeyed,
but when the evil has matured
then to the fool comes dukkha.

Explanation:
When a sinful act is being done, the ignorant person enjoys it as if it were
honey. But the suffering comes when it begins to yield its evil results.

The
Story of Theri Uppalavanna

While
residing at the Jetavana monastery, the Buddha uttered Verse (69) of this book,
with reference to Theri Uppalavanna.

Once
there was a young daughter of a rich man in Savatthi. Because she was so
beautiful, with looks so tender and sweet, like a blue lotus flower, she was
called “Uppalavanna”, the blue lotus. The fame of her beauty spread
far and wide and there were many suitors: princes, rich men and many others.
But she decided that it would be better for her to become a bhikkhuni, a
female member of the Buddhist Order. One day, after lighting a lamp, she kept
her mind fixed on the flame and meditating on the fire kasina (object of
concentration) she soon achieved Magga Insight and finally attained arahatship.

Some
time later, she moved to the ‘Dark Forest’ (Andhavana) and lived in solitude.
While Theri Uppalavanna was out on her alms-round, Nanda, the son of her uncle,
came to her monastery and hid himself underneath her couch. Nanda had fallen in
love with Uppalavanna before she became a bhikkhuni; his intention obviously
was to take her by force. When Uppalavanna returned she saw Nanda and said,
“You fool! Do no harm, do not molest.” But he would not be stopped.
After satisfying himself, he left her. As soon as he stepped on the ground, the
earth opened wide and he was swallowed up.

Hearing
about this, the Buddha spoke in verse as follows:

At the
end of the discourse, many attained Sotapatti Fruition.

The
Buddha next sent for King Pasenadi of Kosala and told him about the dangers
that bhikkhunis living in forests had to face from irresponsible persons
obsessed with sex. The king then promised to build monasteries for bhikkhunis
only in towns or close to the towns.

I am delighted to read your materials. I pray for the peace and
happiness of your state and your people. Buddhism preaches non-violence
and wisdom is always the great antidote of all poisons of society. I
pray that your people will have the courage and strength in your pursuit
of social justice and equality for all.
Thuan VanTran, ESQ.

Has Uttar Pradesh moved on?

Yes. UP has clearly moved on, and like so much
else, could show the rest of India the way.

The ârajnaitik havaâ or âelectoral windâ sweeping this flank of Uttar Pradesh,
and converting into a âleharâ, literally a wave, that will knock every other
party out of sight by PraBuddha Bharath  Pradhan, of the pro-Sarvajan i.e., entire
people Ms Mayawati of  Bahujan Samaj
Party (BSP).

Sarvajan leader Mayawati and her BSP has ruled
the state continuously for the last five years with an iron fist, made
politics sacred with highly performing best and meritorious governance with a
policy of Sarvajan Hithay Sarvajan Sukhay i.e., for the welfare and happiness
of the entire people distributing the wealth of the state equally among all
sections of the society for equality, social transformation and economic
emancipation.

Voters are ready to change the “negative
politics” prevalent in the whole country for the past 65 years, and leaders
should get the message that they will not get support if they do no work for
progress.

Congress hand (Congress poll symbol) is  soiled with black money,corruption and scams
were rampant during its regimes. It did not sanction a pacakage of Rs 80000
crore meant for farmers were taken away by the elephant (BSP’s poll symbol) in
Lucknow.

Accusing Congress and BJP of not being serious in
bringing back blackmoney stashed away in foreign banks, BSP supremo Mayawati
said it appeared both parties had deposited in those banks black money earned
through corrupt means.

The third phase elections was held in 56 constituencies
of 10 districts of eastern UP and Vindhyachal region in the state on 15th
February.

More than 1 crore 79 lakhs electorates will decide the fate  of 1,021 candidates who  are
in fray for the third  phase elections .

Out of 11,500 polling stations s there are some sensitive areas where Central
Para Military Forces have been deployed as  third phase polling will cover
the Maoist-infested  areas like Mirzapur, Sonebhadra and Chandauli
districts and the inter-state borders

Prominent candidates whose fate would be decided in this phase include BSP government
ministers Nand Gopal Gupta and Indrajeet Saroj.

In a series of blogs
on its website, the BSP describes Congress as âcorruptâ and âdeceiving.â
The party, spearheaded by Chief Minister Kumar Mayawati, targets other parties,
too.

One blog
post says Mulayam Singh Yadav, the president of the regional Samajwadi Party
âdoesnât have the ability or strengthâ to overthrow the BSP.

BSP is
aware that the  partyâs online  efforts itself will not translate into more
votes. It totally relies on its cadres who themselves are the media of BSP. Although
census data shows that around 22% of U.P.âs population lives in urban areas â
only part of which have Internet or smartphone access â political experts say
online campaigning alone is not enough.

WordPress database error: [Table './sarvajan_ambedkar_org/wp_comments' is marked as crashed and should be repaired]
SELECT COUNT(comment_ID) FROM wp_comments WHERE comment_post_ID = 1790 AND comment_approved = '1';

WordPress database error: [Table './sarvajan_ambedkar_org/wp_comments' is marked as crashed and should be repaired]
SELECT COUNT(*) FROM wp_comments WHERE comment_post_ID = '1790' AND comment_approved = '1'