WordPress database error: [Table './sarvajan_ambedkar_org/wp_comments' is marked as crashed and should be repaired]
SELECT ID, COUNT( comment_ID ) AS ccount FROM wp_posts LEFT JOIN wp_comments ON ( comment_post_ID = ID AND comment_approved = '1') WHERE ID IN (1800) GROUP BY ID 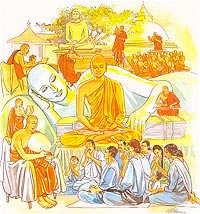 Verse
79. Living Happily In The Dhamma

Happy is he who Dhamma drinks
with heart thatâs clear and cool.
One so wise eâer delights
in Dhamma declared by the Noble.

Explanation: One who delights in “The Teaching” lives
happily with a pure mind. The experience of the “Sublime Ones” the
wise always enjoy

Verse 79: He who drinks in the Dhamma lives happily with a
serene mind; the wise man always takes delight in the Dhamma (Bodhipakkhiya
Dhamma) expounded by the Noble Ones (ariyas).

The Story of Thera Mahakappina

While residing at the Jetavana monastery, the Buddha uttered
Verse (79) of this book, with reference to Thera Mahakappina.

Mahakappina was king of Kukkutavati. He had a queen named Anoja;
he also had one thousand ministers to help him rule the country. One day, the
king accompanied by those one thousand ministers, was out in the park. There,
they met some merchants from Savatthi. On learning about the Buddha, the
Dhamma, and the Samgha from these merchants the king and his ministers
immediately set out for Savatthi.

On that day, when the Buddha surveyed the world with his
supernormal power, he saw in his vision, Mahakappina and his ministers coming
towards Savatthi. He also knew that they were due for arahatship. The Buddha
went to a place one hundred and twenty yojanas away from Savatthi to meet them.
There, he waited for them under a banyan tree on the bank of the river
Candabhaga. King Mahakappina and his ministers came to the place where the
Buddha was waiting for them. When they saw the Buddha, with six-coloured rays
radiating from his body, they approached the Buddha and paid homage to him. The
Buddha then delivered a discourse to them. After listening to the discourse the
king and all his ministers attained Sotapatti Fruition, and they asked
the Buddha to permit them to join the Order. The Buddha, reflecting on their
past and finding that they had made offerings of yellow robes in a past
existence, said to them, “Ehi bhikkhu“, and they all became bhikkhus.

Meanwhile, Queen Anoja, learning about the king’s departure for
Savatthi, sent for the wives of the one thousand ministers, and together with
them followed the king’s trail. They too came to the place where the Buddha was
and seeing the Buddha with a halo of six colours, paid homage to him. All this
time, the Buddha by exercising his supernormal power had made the king and his
ministers invisible so that their wives did not see them. The queen therefore
enquired where the king and his ministers were. The Buddha told the queen and
her party to wait for a while and that the king would soon come with his
ministers. The Buddha then delivered another discourse; at the end of this
discourse the king and his ministers attained arahatship; the queen and
the wives of the ministers attained Sotapatti Fruition. At that instant,
the queen and her party saw the newly admitted bhikkhus and recognized
them as their former husbands.

The ladies also asked permission from the Buddha to enter the
Order of Bhikkhunis; so they were directed to go ahead to Savatthi.
There they entered the Order and very soon they also attained arahatship.
The Buddha then returned to the Jetavana monastery accompanied by one thousand
bhikkhus.

At the Jetavana monastery, Thera Mahakappina while resting
during the night or during the day would often say, “Oh, what
happiness!” (Aho Sukham). The bhikkhus, hearing him saying this so
many times a day told the Buddha about it. To them the Buddha replied, “My
son Kappina having had the taste of the Dhamma lives happily with a serene
mind; he is saying these words of exultation repeatedly with reference to
Nibbana.”

WordPress database error: [Table './sarvajan_ambedkar_org/wp_comments' is marked as crashed and should be repaired]
SELECT COUNT(comment_ID) FROM wp_comments WHERE comment_post_ID = 1800 AND comment_approved = '1';

WordPress database error: [Table './sarvajan_ambedkar_org/wp_comments' is marked as crashed and should be repaired]
SELECT COUNT(*) FROM wp_comments WHERE comment_post_ID = '1800' AND comment_approved = '1'