WordPress database error: [Table './sarvajan_ambedkar_org/wp_comments' is marked as crashed and should be repaired]
SELECT ID, COUNT( comment_ID ) AS ccount FROM wp_posts LEFT JOIN wp_comments ON ( comment_post_ID = ID AND comment_approved = '1') WHERE ID IN (1805) GROUP BY ID 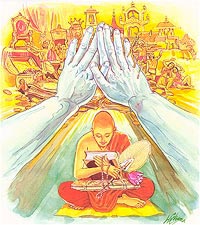 Neither
for oneâs own, nor for anotherâs sake
one should wish for children, wealth, estate,
nor success desire by means unjust,
thus virtuous, and wise, righteous one would be.

Explanation:
Not for oneâs own benefit nor for that of others, does he desire children,
wealth or kingdom. Nor does he desire self-glory. Thus he is realistic,
penetrative and well behaved.

Verse
84: For his own sake or for the sake of others, he does no evil; nor does he
wish for sons and daughters or for wealth or for a kingdom by doing evil; nor
does he wish for success by unfair means; such a one is indeed virtuous, wise
and just.

The
Story of Thera Dhammika

While
residing at the Jetavana monastery, the Buddha uttered Verse (84) of this book,
with reference to Thera Dhammika.

Dhammika
lived in Savatthi with his wife. One day, he told his pregnant wife that he
wished to become a bhikkhu; his wife pleaded with him to wait until after the
birth of their child. When the child was born, he again requested his wife to
let him go; again, she pleaded with him to wait until the child could walk.
Then Dhammika thought to himself, “It will be useless for me to ask my
wife for her approval to join the Order; I shall work for my own liberation.”
Having made a firm decision, he left his house to become a bhikkhu. He took a
subject of meditation from the Buddha and practised meditation ardently and
diligently and soon became an arahat.

At the
congregation of the bhikkhus, the Buddha was told how Dhammika became a bhikkhu
and attained arahatship, and how through him his son and his wife also attained
arahatship. To them the Buddha said, “Bhikkhus, a wise man does not
wish for wealth and prosperity by doing evil, whether it is for his own sake or
for the sake of others. He only works for his own liberation from the round of
rebirths (samsara) by comprehending the Dhamma and living according to the Dhamma.”

WordPress database error: [Table './sarvajan_ambedkar_org/wp_comments' is marked as crashed and should be repaired]
SELECT COUNT(comment_ID) FROM wp_comments WHERE comment_post_ID = 1805 AND comment_approved = '1';

WordPress database error: [Table './sarvajan_ambedkar_org/wp_comments' is marked as crashed and should be repaired]
SELECT COUNT(*) FROM wp_comments WHERE comment_post_ID = '1805' AND comment_approved = '1'