WordPress database error: [Table './sarvajan_ambedkar_org/wp_comments' is marked as crashed and should be repaired]
SELECT ID, COUNT( comment_ID ) AS ccount FROM wp_posts LEFT JOIN wp_comments ON ( comment_post_ID = ID AND comment_approved = '1') WHERE ID IN (1802,1801) GROUP BY ID

BROAD MINDED PEOPLE OF UP!

WILL GIVE SEATS THREE HUNDRED AND THREE!

FOR THE ELEPHANT OF BSP!

All  FREE ONLINE eNÄlandÄ Research & Practice UNIVERSITY Students and their friends are requested to register with their respective swimming pools to end Polio program organised by Rotary Club at 04:30 PM on 25-02-2012 to create world record for large number of swimmers swim at the same time between 05:00 and 06:30 PM all over the world. 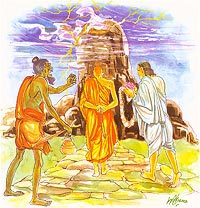 Verse 81. The Wise Are Steadfast

Just as a mighty boulder
stirs not with the wind,
so the wise are never moved
either by praise or blame.

Verse 81: As a mountain of rock is unshaken by
wind, so also, the wise are unperturbed by blame or by praise.

While residing at the Jetavana monastery, the
Buddha uttered Verse (81) of this book, with reference to Thera Bhaddiya.

Bhaddiya was one of the bhikkhus staying at
the Jetavana monastery. Because of his short stature he was known as Lakundaka
(the dwarf) to other bhikkhus. Lakundaka Bhaddiya was very good natured; even
young bhikkhus would often tease him by pulling his nose or his ear, or by
patting him on his head. Very often they would jokingly say, “Uncle, how
are you? Are you happy, or are you bored with your life here as a
bhikkhu?”, etc. Lakundaka Bhaddiya never retaliated in anger, or abused
them; in fact, even in his heart he did not get angry with them.

When told about the patience of Lakundaka
Bhaddiya, the Buddha said, “An arahat never loses his temper, he has no
desire to speak harshly or to think ill of others. He is like a mountain of
solid rock; as a solid rock is unshaken, so also, an arahat is unperturbed by
scorn or by praise.”

WordPress database error: [Table './sarvajan_ambedkar_org/wp_comments' is marked as crashed and should be repaired]
SELECT COUNT(comment_ID) FROM wp_comments WHERE comment_post_ID = 1802 AND comment_approved = '1';

WordPress database error: [Table './sarvajan_ambedkar_org/wp_comments' is marked as crashed and should be repaired]
SELECT COUNT(*) FROM wp_comments WHERE comment_post_ID = '1802' AND comment_approved = '1'

comments (0)
24 02 2012 LESSON 534 The Dhammapada Verses and Stories Dhammapada Verse 80 Panditasamanera Vatthu The Wise Control Themselves
Filed under: General
Posted by: site admin @ 12:51 am

Practice a Sutta a
Day Keeps Dukkha Away

Verse 80. The Wise
Control Themselves

Irrigators
govern waters,
fletchers fashion shafts,
as joiners shape their timber
those who are wise tame themselves.

Explanation:
The irrigator who manages water is skilled in directing water to whatever place
he wants. The fletcher skilfully shapes a very straight arrow-shaft out of a
piece of wood by working skilfully on it. The carpenter selects a block of wood
and constructs whatever he wants out of it, depending on his need. In the same
way, the wise person works upon their mind, restraining it the way they desire.

The
Story of Samanera Pandita

While residing
at the Jetavana monastery, the Buddha uttered Verse (80) of this book, with
reference to Samanera Pandita.

Pandita
was a young son of a rich man of Savatthi. He became a samanera at the age of
seven. On the eighth day after becoming a samanera, as he was following Thera
Sariputta on an alms-round, he saw some farmers channeling water into their
fields and asked the thera, “Can water which has no consciousness be
guided to wherever one wishes ?” The thera replied, “Yes, it can be
guided to wherever one wishes.” As they continued on their way, the
samanera next saw some fletchers heating their arrows with fire and
straightening them. Further on, he came across some carpenters cutting, sawing
and planing timber to make it into things like cart-wheels. Then he pondered,
“If water which is without consciousness can be guided to wherever one
desires, if a crooked bamboo which is without consciousness can be
straightened, and if timber which is without consciousness can be made into
useful things, why should I, having consciousness, be unable to tame my mind
and practise Tranquillity and Insight Meditation?”

Then
and there he asked permission from the thera and returned to his own room in
the monastery. There he ardently and diligently practised meditation, contemplating
the body. Sakka and the devas also helped him in his meditation by keeping the
monastery and its precincts very quiet and still. Before meal time Samanera
Pandita attained Anagami Fruition.

In this
connection, the Buddha said to the bhikkhus of the monastery, “When one
is earnestly practising the Dhamma, even Sakka and the devas give protection
and keep guard; I myself have kept Thera Sariputta engaged at the door so that
Samanera Pandita should not be disturbed. The samanera, having seen the farmers
irrigating their fields, the fletchers straightening their arrows, and
carpenters making cart-wheels and other things, tames his mind and practises
the dhamma; he has now become an arahat.”

The
Buddha then spoke in verse as follows:

WordPress database error: [Table './sarvajan_ambedkar_org/wp_comments' is marked as crashed and should be repaired]
SELECT COUNT(comment_ID) FROM wp_comments WHERE comment_post_ID = 1801 AND comment_approved = '1';

WordPress database error: [Table './sarvajan_ambedkar_org/wp_comments' is marked as crashed and should be repaired]
SELECT COUNT(*) FROM wp_comments WHERE comment_post_ID = '1801' AND comment_approved = '1'