Without Sickness Among The Sick-

Anxious Among The Anxious 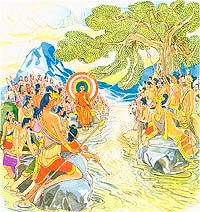 We the unhating live
happily midst the haters,
among the hating humans
from hatred dwell we free.

Verse 197: Indeed we live very happily, not hating anyone among those who
hate; among men who hate we live without hating anyone.

The Story of the Pacification of the Relatives of the Buddha

The Buddha uttered Verse (197) to (199) of this book, in the Sakyan country,
with reference to his relatives who were quarrelling over the use of the water
from the Rohini river.

Kapilavatthu the town of the Sakyans and Koliya the town of the Kolyans were
situated on either side of the Rohini river. The cultivators of both towns
worked the fields watered by the Rohini river. One year, they did not have
enough rain and finding that the paddy and other crops were beginning to shrivel
up, cultivators on both sides wanted to divert the water from the Rohini river
to their own fields. Those living in Koliya said that there was not enough water
in the river for both sides, and that if only they could channel the water just
once more to their fields that would be enough for the paddy to mature and
ripen. On the other hand, people from Kapilavatthu argued that, in that case,
they would be denied the use of the water and their crops would surely fail, and
they would be compelled to buy from other people. They said that they were not
prepared to go carrying their money and valuables to the opposite bank of the
river in exchange for food.

Both sides wanted the water for their own use only and there was much ill
will between them due to abusive language and accusations on both sides. The
quarrel that started between the cultivators came to the ears of the ministers
concerned, and they reported the matter to their respective rulers, and both
sides prepared to go to war.

The Buddha, surveying the world with his supernormal powers, saw his
relatives on both sides of the river coming out to meet in battle and he decided
to stop them. All alone, he went to them by going through the sky, and stopped
immediately above the middle of the river. His relatives seeing him, powerfully
and yet peacefully sitting above them in the sky, hid aside all their weapons
and paid obeisance to the Buddha. Then, the Buddha said to them, “For
the sake of some water, which is of little value, you should not destroy your
lives which are of so much value and priceless. Why have you taken this stupid
action? If I had not stopped you today, your blood would have been flowing like
a river by now. You live hating your enemies, but I have none to hate; you are
ailing with moral defilements, but I am free from them; you are striving to have
sensual pleasures, but I do not strive for them.”

At the end of the discourse many people attained Sotapatti Fruition.