Dhammapada: Verses and Stories 213-Visakha Vatthu-Sorrow And Fear Arise Due To Loved Ones 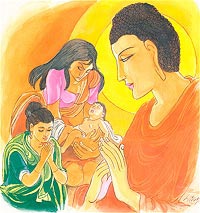 Verse 213. Sorrow And Fear Arise Due To Loved Ones

Explanation: From affection sorrow arises. From affection
fear arises. To one free of affection there is no sorrow. Therefore,
how can there be fear for such a person?


The Story of Visakha

While residing at the Jetavana monastery, the Buddha uttered Verse (213) of
this book, with reference to Visakha, the renowned donor of the Pubbarama
monastery.

One day, a granddaughter of Visakha named Sudatta died and Visakha felt very
deeply about her loss and was sorrowing over the child’s death. So she went to
the Buddha; when the Buddha saw her, he said, “Visakha, don’t you
realize that many people die in Savatthi every day? If you were to regard all of
them as you regard your own grandchild you would have to be endlessly weeping
and mourning. Let not the death of a child affect you too much. Sorrow and fear
arise out of endearment.”

Samajwadi Party (SP) government is
showing signs of walking on the same steps that had once turned Uttar
Pradesh into a lawless state.

In
a recent incident, SP leader and former minister Amarmani Tripathi, who
is serving a life sentence for the for the murder of poetess Madhumita
Shukla, has been reported to be having a free run inside - and outside -
the Gorakhpur prison. Amarmani Tripathi, who is serving a life term for murder in Gorakhpur jail, is seen stepping out of a hospital where
he makes daily trips in an SUV and holds a public court

Thanks to his alleged proximity to SP chief Mulayam Singh Yadav, Tripathi has been bending all the rules in the jail manual.

Tripathi,
who had allegedly organised a mujra (traditional dance) inside the jail
in the past, has been making daily trips to Baba Raghav Das (BRD)
Medical College on the pretext of medical treatment. But once there, he
holds a people’s court almost on a regular basis.

Sources
said Tripathi comes out of jail in a prison van and then gets into a
SUV parked outside. He then rides to the BRD Medical College where he
spends a leisurely day before returning to his barracks.

‘This
has been going on for the past three months. He is taken to the medical
college in one of the SUVs and holds a people’s court there. He talks
to the people who gather to meet him and tries to provide all possible
help,’ a hospital employee said. ‘Tripathi was brought to Gorakhpur
on March 13 for a hearing in connection with a land-grabbing case. Since
then, he has been visiting the hospital daily and stays there from 10
am to 5 pm.

The media is not allowed inside the hospital when he holds the people’s court,’ Kishore alleged.

He
raised the matter in the state assembly, following which jail minister
Raghuraj Pratap Singh (Raja Bhaiyya) had assured of suitable action.

The
Gorakhpur police had also complained about Tripathi’s frequent visits
to the hospital. Secretary (home) Deepak Kumar admitted he had received a
letter from the police and said the ‘government has decided to probe
the matter’.

According to
sources, Gorakhpur SSP Ashutosh Kumar had written to the state
government raising objection to the free and illegal movement of the
former minister, but when contacted, he remained evasive.

‘Someone
has sent a complaint against Tripathi to the state government. The
government has asked me to send a report, which I have done,’ Kumar
said.