Dhammapada: Verses and Stories 216-Annatarabrahmana Vatthu-Sorrow And Fear Arise Due To Miserliness 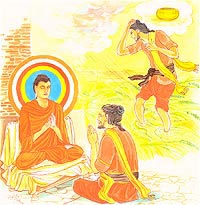 Verse 216. Sorrow And Fear Arise Due To Miserliness

Explanation: From craving arises sorrow. From craving fear
arises. To one free of craving there is no sorrow. For such a person
how can there be fear?

Verse 216: Craving begets sorrow, craving begets fear. For him who is free
from craving there is no sorrow; how can there be fear for him?

The Story of a Brahmin

While residing at the Jetavana monastery, the Buddha uttered Verse (216) of
this book, with reference to a brahmin who was a farmer.

The brahmin lived in Savatthi, and he was a non-Buddhist. But the Buddha knew
that the brahmin would attain Sotapatti Fruition in the near future. So the
Buddha went to where the brahmin was ploughing his field and talked to him. The
brahmin became friendly and was thankful to the Buddha for taking an interest in
him and his work in the field. One day, he said to the Buddha, “Samana
Gotama, when I have gathered my rice from this field, I will first offer you
some before I take it. I will not eat my rice until I have given you some.”
However, the Buddha knew beforehand that the brahmin would not have the
opportunity to harvest the rice from his field that year, but he kept silent.

Then, on the night before the brahmin was to harvest his rice, there was a
heavy downpour of rain which washed away the entire crop of rice. The brahmin
was very much distressed, because he would no longer be able to offer any rice
to his friend, the Samana Gotama.

The Buddha went to the house of the brahmin and the brahmin talked to him
about the great disaster that had befallen him. In reply, the Buddha said, “Brahmin,
you do not know the cause of sorrow, but I know. If sorrow and fear arise, they
arise because of craving.”