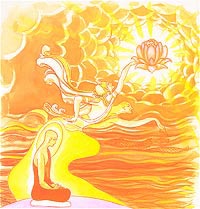 Verse 218. The Person With Higher Urges

One with a wish for the Undeclared,
with mind so well-pervaded,
a mind not bound in pleasures of sense,
an âupstream-goerâsâ called.

Explanation: In that person a deep yearning for the undefined
- for Nibbana - has arisen. He has already touched it mentally. He
is called a swimmer against the current - an upstream-bound person.
He has already started the process towards Nibbana.

Verse 218: He who has developed a desire for the Ineffable (i.e., Nibbana),
whose mind reaches the same, and is no longer attached to the sensual world
(kamaloka), is called one who is bound upstream (uddhamsoto).

1. uddhamsoto: one who is going upstream, i.e., one who is bound for the
“Pure Abodes”, (Sudahavasa Brahmaloka). The reference is to the
anagami or now-returner, who is born in the Aviha Suddhavasa and from there
passes upwards till he reaches the Akanittha Suddhavasa, the highest of the five
Pure Abodes. (The Commentary)

The Story of an Anagami Thera

While residing at the Jetavana monastery, the Buddha uttered Verse (218) of
this book, with reference to a thera who was an Anagami.

His pupils thought their teacher had passed away without attaining any of the
maggas and they felt sorry for him. They went to the Buddha and asked him where
their teacher was reborn. The Buddha replied, “Bhikkhus! Your teacher,
who was an Anagami before he passed away, is now reborn in the abodes of the
Brahmas (Suddhavasa Brahmaloka). He did not reveal his attainment of Anagami
Magga because he felt ashamed that he had achieved only that much, and he was
ardently striving to attain arahatship. Your teacher is now freed from the
attachment to the sensual world (kamaloka) and would certainly rise to higher
realms.”

At the end of the discourse those bhikkhus attained arahatship.