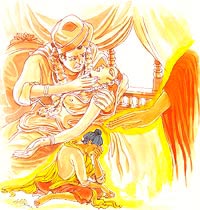 Verse 215. The Outcome Of Lust

Explanation: From desire arises sorrow. From desire fear arises.
To one free of desire there is no sorrow. For such a person how can
there be fear?

Verse 215: Lust begets sorrow, lust begets fear. For him who is free from
lust there is no sorrow; how can there be fear for him?

The Story of Anitthigandha Kumara

While residing at the Jetavana monastery, the Buddha uttered Verse (215) of
this book, with reference to a youth, named Anitthigandha.

Anitthigandha lived in Savatthi. He was to marry a beautiful young girl from
the city of Sagala, in the country of the Maddas. As the bride was coming from
her home to Savatthi, she became ill and died on the way. When the bridegroom
learned about the tragic death of his bride he was brokenhearted.

At the end of the discourse Anitthigandha attained Sotapatti Fruition.