The Good And The Wise

Dr. B. R. Ambedkar on Indian currency and RBI 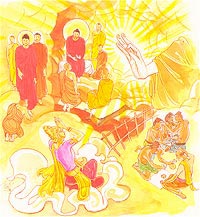 So fairâs the sight of Noble Ones,
ever good their company,
by relating not to fools
ever happy one may be.

Verse 208: Therefore one should follow a resolute, intelligent, learned,
persevering and dutiful ariya; follow such a virtuous and wise man, as the moon
follows the path of the stars.

The Story of Sakka

About ten months before the Buddha realized parinibbana, the Buddha was
spending the vassa at Veluva village near Vesali. While he was staying there, he
suffered from dysentery. When Sakka learned that the Buddha was ailing, he came
to Veluva village so that he could personally nurse the Buddha during his
sickness. The Buddha told him not to worry about his health as there were many
bhikkhus near him; but Sakka did not listen to him and kept on nursing the
Buddha until he recovered.

The bhikkhus were surprised and awe-struck to find Sakka himself attending on
the Buddha. When the Buddha heard their remarks he said, “Bhikkhus!
There is nothing surprising about Sakka’s love and devotion to me. Once, when
the former Sakka was growing old and was about to pass away, he came to see me.
Then, I expounded the Dhamma to him. While listening to the Dhamma, he attained
Sotapatti Fruition; then he passed away and was reborn as the present Sakka. All
these happened to him simply because he listened to the Dhamma expounded by me.
Indeed, bhikkhus, it is good to see the Noble Ones (ariyas); it is a pleasure to
live with them; to live with fools is, indeed, painful.”

Explanation: Seeing nobles ones is good. Living with them
is always conducive to happiness. Associating with the ignorant is
like keeping company with enemies.

Dr. B. R. Ambedkar on Indian currency and RBI

Dr Ambedkarâs Role in the Formation of Reserve Bank of India
Reserve
Bank of India (RBI) came into picture according to the guidelines laid
down by Dr Ambedkar. RBI was conceptualized as per the guidelines,
working style and outlook presented by Dr Ambedkar in front of the
Hilton Young Commission. When this commission came to India under the
name of âRoyal Commission on Indian Currency & Financeâ, each and
every member of this commission were holding Dr Ambedkarâs book named
âThe Problem of the Rupee â Its origin and its solution.â

(The
legislative assembly passed this under the name of RBI act 1934, its
need, working style and its outlook was presented by Dr Ambedkar
in-front of Hilton Young Commission. Read, âEvidence before the Royal
Commission on Indian Currency and Financeâ and âThe Problem of the Rupee
â Its origin and its solution.â)

What
hurts many of us is the picture of Mr. Gandhi on the Indian currency.
We need to ask everyone whatâs the contribution of these two leaders
(Rabindranath Tagore and Mr. Gandhi) towards Indian currency, finance
and economics, and who deserves to be there on the signposts or on
Indian currency?

If a man with Godâs name on his tongue and a
sword under his armpit deserved the appellation of a Mahatma, then
Mohandas Karamchand Gandhi was a Mahatma.    - Babasaheb Ambedkar
Writing
about who deserves the place on Indian currency reminds me of a
Hollywood movie âDo the Right Thingâ directed a way back in 1989 by
Spike Lee. Movie revolves around the demand of Afro-Americans to place
some pictures of black heroes on the âWall of Fameâ in a pizza shop
(where all pictures are of Italian heroes as pizza shop owner is from
Italy and very proud of that) as the pizzeria is situated in a black
neighbourhood and sells pizza to black people.
At the end of the
struggle Afro-Americans succeeded to have a picture of Malcolm X and
Martin Luther King, shaking hands on the âWall of Fame.â
(excerpts from article âWhy werenât we told?â)