Dhammapada: Verses and Stories 221-Rohinikkattiyakanna Vatthu-Who Is Not Assaulted By Sorrow


The Blessed Buddha once said:


Bhikkhus, these 8
things, when cultivated & refined, lead to going beyond


from this near shore, right here, to the far shore beyond all… What
eight?

These 8 things, when cultivated and refined, lead to
going beyond from


this near shore, right here, to the far shore beyond all imagination.


The Well-Gone-One, the supreme Teacher, then added this:

Few humans cross to that sublime far shore beyond all
being.

Mostly, people just run up and down along this barren bank!


Those whose praxis is like this even and exact Dhamma,


Will pass beyond the State of Death in quiet harmony!


Having left all the dark and evil doing, any intelligence


Seeks the luminous bright light by leaving this turmoil,


by going forth into solitary & silent
homelessness.


Secluded from lust, he experiences an unworldly bliss!


Owing nothing, the wise and clever man thereby cleans


himself of all these mental pollutions and defilements…


Mentally well evolved by the 7
links to awakenment,


Delighting in non-clinging and relinquishment of all,


Such luminous ones, having quenched all fermentation,


Are fully released even right here in this world! 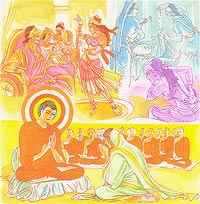 Verse 221. He Who Is Not Assaulted By Sorrow

Anger and pride should one forsake,
all fetters cast aside,
dukkhaâs none where no desire,
no binding to body or mind.

Explanation: Abandon anger. Give up pride fully. Get rid of
all clingings. To that person, who is not attracted to name and form,
and is free of appendages, no suffering befalls.

Verse 221: Give up anger, abandon conceit, overcome all fetters. Ills of life
(dukkha) do not befall one who does not cling to mind and body and is free from
moral defilements.

1. samyojanam: a fetter. There are ten fetters of human passion
which bind man to the round of rebirths; these are cast off at different stages
of Magga Insight.

While residing at the Nigrodharama monastery, the Buddha uttered Verse (221)
of this book, with reference to Princess Rohini, sister of Thera Anuruddha.

On one occasion, Thera Anuruddha visited Kapilavatthu. While he was staying
at the monastery there, all his relatives, with the exception of his sister
Rohini, came to see him. On learning from them that Rohini did not come because
she was suffering from leprosy, he sent for her. Covering her head in shame,
Rohini came when she was sent for. Thera Anuruddha told her to do some
meritorious deed and he suggested that she should sell some of her clothing and
jewelry; and with the money raised, to build a refectory for the bhikkhu. Rohini
agreed to do as she was told. Thera Anuruddha also asked his other relatives to
help in the construction of the hall. Further, he told Rohini to sweep the floor
and fill the water-pots every day even while the construction was still going
on. She did as she was instructed and she began to get better.

When the hall was completed, the Buddha and his bhikkhus were invited for
alms-food. After the meal, the Buddha asked for the donor of the building and
alms-food, but Rohini was not there. So the Buddha sent for her and she came.
The Buddha asked her whether she knew why she was inflicted with this dreaded
disease and she answered that she did not know. So the Buddha told her that she
had the dreadful disease because of an evil deed she bad done out of spite and
anger, in one of her past existences. As explained by the Buddha, Rohini was, at
one time, the chief queen of the king of Baranasi. It so happened that the king
had a favourite dancer and the chief queen was very jealous of her. So the queen
wanted to punish the dancer. Thus one day, she had her attendants put some
itching powder made from cow-hage pods in the dancer’s bed, her blankets, etc.
Next, they called the dancer, and as though in jest, they threw some itching
powder on her. The girl itched all over and was in great pain and discomfort.
Thus itching unbearably, she ran to her room and her bed, which made her suffer
even more.

As a result of that evil deed Rohini had become a leper in this existence.
The Buddha then exhorted the congregation not to act foolishly in anger and not
to bear any ill will towards others.

At the end of the discourse, many in the congregation attained Sotapatti
Fruition. Princess Rohini also attained Sotapatti Fruition, and at the same time
her skin disease disappeared, and her complexion became fair, smooth and very
attractive.