Boost for Mayawati as SC slams CBI on graft case 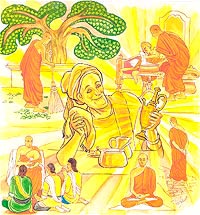 Little by little, time after time,
successively then let the sage
blow away all blemishes
just as a smith with silver.

Explanation: Wise persons, moment by moment, little by little,
remove the blemishes off their own selves, just like the smiths removing
impurities off silver.

Verse 239: By degrees, little by little, from moment to moment a wise man
removes his own impurities (moral defilements), as a smith removes the dross of
silver or gold.

The Story of a Brahmin

While residing at the Jetavana monastery, the Buddha uttered Verse (239) of
this book, with reference to a brahmin.

Once, a brahmin saw a group of bhikkhus re-arranging their robes as they were
preparing to enter the city for alms-food. While he was looking, he found that
the robes of some of the bhikkhus touched the ground and got wet because of dew
on the grass. So he cleared that patch of ground. The next day, he found that as
the robes of the bhikkhus touched bare ground, the robes got dirty. So he
covered that patch of ground with sand. Then again, he observed that the
bhikkhus would sweat when the sun was shining and that they got wet when it was
raining. So finally, he built a rest house for the bhikkhus at the place where
they gathered before entering the city for alms-food.

When the building was finished, he invited the Buddha and the bhikkhus for
alms-food. The brahmin explained to the Buddha how he had performed this
meritorious deed step by step. To him the Buddha replied “O Brahmin! The
wise perform their acts of merit little by little, and gradually and constantly
they remove the impurities of moral defilements.”

jaibheem.com
Our Mission, India Once Again A Buddhist Nation
A Website On Buddhism From Land Of Buddha ! 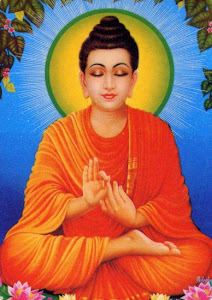 The little boy in north-east Thailand seems to continue to behave like a monk, as he would have done in his previous life: shaving his head and wearing a yellow robe. He can give the traditional blessing in Pali quite fluently, and then chants “Itipiso”, “Bahum” and “Mahakaruniko” with a few mistakes and some prompting, just like a normal monk would do.

Young children are sometimes very close to Dhamma, for example this young boy in Sri Lanka called Dhammaruwan who used to recite Suttas in Pali from the age of 3 in an old style:

The Great Stupa of Dharmakaya Which Liberates Upon Seeing

From Wikipedia, the free encyclopediaJump to: navigation, searchThe Great Stupa of Dharmakaya Which Liberates Upon SeeingThe Great Stupa of Dharmakaya is located at the Shambhala Mountain Center in Colorado, USA. It was built to inter the ashes of Chogyam Trungpa, who died in 1987. In many Buddhist traditions it is common to build a stupa to honour a respected teacher after their death.Construction of the stupa began in 1988. The structure took ten years to complete and used a special concrete formula designed to last one thousand years. The Stupa was consecrated in a ceremony that lasted several days in the summer of 2001. This ceremony was attended by many important lamas and students of Chogyam Trungpa.In September 2006, The Dalai Lama visited the Great Stupa for the first time

Enjoy Colorado landscape photography with a John Fielder limited
edition photograph. Bring the grandeur and beauty of Colorado into your
own home or office.

John Fielder has been capturing the beauty of Colorado for 40 years.
From majestic sunrises over the Rockies to colorful Colorado wildflowers
bordering alpine lakes, his photos portray Colorado in all its glory.

You can view and enjoy John’s Colorado landscape photography in
several ways: in his fine art prints, publications, or simply on this
website. President Obama discusses the importance of a college education and why higher education should be affordable for all students willing to work hard, and calls on Congress to stop interest rates on federal Stafford loans from doubling in July.
http://hollywoodresourcecenter.com/resource/aZ-contacts.html?category=1&type=1&who=actorTypes&sess=d150af868262a615999c8a2f0e718723
Actors
Select a choice from the column to your right –>

Acting Coaches (One on One)


Boost for Mayawati as SC slams CBI on graft case In a big boost to former Uttar Pradesh chief minister Mayawati, the
Supreme Court Friday quashed a first information report filed by the
Central Bureau of Investigation (CBI) against her in a disproportionate
assets case in 2003.

“The impugned FIR (first information report) is without jurisdiction and
any investigation pursuant thereto is illegal and liable to be quashed,
accordingly quashed,” said the apex court bench of Justice P.
Sathasivam and Justice Dipak Misra.


The court upheld Mayawati’s contention that the FIR against her filed
by the CBI was mala fide and the misreading of the apex court’s orders
in the Taj heritage corridor case.

Mayawati
contended that the Sep 18, 2003, order of the apex court had
specifically observed about lodging of FIR only with regard to Taj
heritage corridor project case. That order nowhere mentioned about
lodging of second FIR in regard to the disproportionate assets of the
petitioner.

Mayawati wanted to develop the Taj corridor, an
80-acre wasteland sandwiched between the Taj Mahal and Agra Fort, as a
commercial hub and amusement park.

But as the Archaeological Survey of India did not clear the project, the Supreme Court ordered its suspension in 2003.

The
apex court said: “…after reading all the orders of this court which
are available in the ‘compilation’, we are satisfied that this court
being the ultimate custodian of the fundamental rights did not issue any
direction to the CBI to conduct a roving inquiry against the assets of
the petitioner (Mayawati) commencing from 1995 to 2003…”.

Taking
note of the investigating agency’s submission that it had relied on its
order in respect of the Taj corridor case in lodging the FIR in
disproportionate assets case, the court said corridor project was
conceived only in July 2002 and an amount of Rs.17 crore was released in
August/September 2002″.

Justice Sathasivam said: “The method adopted by the CBI is unwarranted and without jurisdiction.”

“Since the order dated Sep 18, 2003, does not contain
any specific direction regarding lodging of FIR in the matter of
disproportionate assets case against the petitioner, the CBI is not
justified” in filing the FIR Oct 5, 2003.

The
court said that it was satisfied that the “CBI exceeded its jurisdiction
in lodging” the FIR in the “absence of any direction from this court in
its Sep 18, 2003 order or any subsequent orders”.