Dhammapada Verse 270 Balisika Vatthu - A Monk Should Destroy All Passions 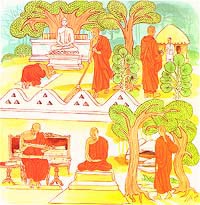 Verse 271. A Monk Should Destroy All Passions

Not by vows and rituals
or again by learning much
or by meditative calm
or by life in solitude.

Explanation: These two stanzas are an admonition to the monks
making an effort to reach the state of blemishlessness - Nibbana.
They are asked not to slacken their effort to win liberation by being
content with some achievement which only pave the way to the final
goal.

Verse 270: He who harms living beings is, for that reason, not an ariya (a
Noble One); he who does not harm any living being is called an ariya1.

1. ariya: one who has realized one of the four maggas.

The Story of a Fisherman Named Ariya

While residing at the Jetavana monastery, the Buddha uttered Verse (270) of
this book, with reference to a fisherman named Ariya.

Once, there was a fisherman who lived near the north gate of Savatthi. One
day through his supernormal power, the Buddha found that time was ripe for the
fisherman to attain Sotapatti Fruition. So on his return from the alms-round,
the Buddha, followed by the bhikkhus, stopped near the place where Ariya was
fishing. When the fisherman saw the Buddha, he threw away his fishing gear and
came and stood near the Buddha. The Buddha then proceeded to ask the names of
his bhikkhus in the presence of the fisherman, and finally, he asked the name of
the fisherman. When the fisher man replied that his name was Ariya, the Buddha
said that the Noble Ones (ariyas) do not harm any living being, but since the
fisherman was taking the lives of fish he was not worthy of his name.

At the end of the discourse the fisherman attained Sotapatti Fruition.

Great Vow Zen Monastery was founded in 2002 and is operated by Zen Community of Oregon[1] (ZCO) under the leadership of abbots Chozen Bays,
Roshi, and Hogen Bays. The monastery offers weekend workshops, weeklong
meditation retreats, and special events throughout the year.

THE WOODPECKER, TURTLE, AND DEER

NCE upon a time a Deer lived in a forest near a lake.
Not far from the same lake, a Woodpecker had a nest
in the top of a tree; and in the lake lived a Turtle.
The three were friends, and lived together happily.

A hunter, wandering about in the wood,
saw the foot-prints of the Deer near the edge of the lake.
“I must trap the Deer, going down into the water,”
he said, and setting a strong trap of leather, he went his way.

Early that night when the Deer went down to drink,
he was caught in the trap, and he cried the cry of capture.

At once the Woodpecker flew down from her tree-top,
and the Turtle came out of the water to see what could be done.

Said the Woodpecker to the Turtle:
“Friend, you have teeth; you gnaw through the leather trap.
I will go and see to it that the hunter keeps away.
If we both do our best our friend will not lose his life.”

[16] So the Turtle began to gnaw the leather,
and the Woodpecker flew to the hunter’s house.

At dawn the hunter came, knife in hand,
to the front door of his house.

The Woodpecker, flapping her wings, flew at the hunter
and struck him in the face.

[18] The hunter turned back into the house
and lay down for a little while. Then he rose up again,
and took his knife. He said to himself:
“When I went out by the front door,
a Bird flew in my face; now I will go out by the back door.” So he did.

When the hunter came out the bird flew at him again,
flapping her wings in the hunter’s face.
Then the hunter turned back and lay down again.
When the sun arose, he took his knife, and started out once more.

This time the Woodpecker flew back as fast
as she could fly to her friends, crying, “Here comes the hunter!”

By this time the Turtle had gnawed through
all the pieces of the trap but one.
The leather was so hard that it made his teeth
feel as if they would fall out.
His mouth was all covered with blood.
The Deer heard the Woodpecker, and saw the hunter,
knife in hand, coming on. With a strong pull
the Deer broke this last piece of the trap, and ran into the woods.

The Woodpecker flew up to her nest in the tree-top.

But the Turtle was so weak he could not get away.
He
[19] lay where he was. The hunter picked him up
and threw him into a bag, tying it to a tree.

The Deer saw that the Turtle was taken,
and made up his mind to save his friend’s life.
So the Deer let the hunter see him.

The hunter seized his knife and started after the Deer.
The Deer, keeping just out of his reach,
led the hunter into the forest.

When the Deer saw that they had gone far into the forest
he slipped away from the hunter, and swift as the wind,
he went by another way to where he had left the Turtle.

But the Turtle was not there. The Deer called,
“Turtle, Turtle!”; and the Turtle called out,
“Here I am in a bag hanging on this tree.”

Then the Deer lifted the bag with his horns,
and throwing it upon the ground, he tore the bag open,
and let the Turtle out.

The Woodpecker flew down from her nest,
and the Deer said to them: “You two friends saved my life,
but if we stay here talking, the hunter will find us,
and we may not get away. So do you, Friend Woodpecker,
fly away. And you, Friend Turtle, dive into the water.
I will hide in the forest.”

[20] The hunter did come back, but neither the Deer,
nor the Turtle, nor the Woodpecker was to be seen.
He found his torn bag, and picking that up he went back to his home.

The three friends lived together all the rest of their lives.

Washington County is THE Place to Play!

In our county, there are so many family-friendly activities and
sports designed for kids of all ages, the question is not âWhat are we
going to do?â but, âHow can we fit it all in?â “If the statue of our leader is not restored today (Thursday) itself,
the government should be prepared to face the fallout,” said Leader of
Opposition Swamy Prasad Maurya.

Before the four sped away on motorbikes, they left a pamphlet in the
name of Uttar Pradesh Navnirman Sena, saying they had promised to break
the statue on March 15, 2012 - the day the new Samajwadi Party
government led by Akhilesh Yadav was sworn in.

Nav Nirman Sena, which has claimed responsible for the incident, has
reportedly set a 48-hour deadline for the government to remove all the
statues of SC/ST/OBC icons across the state.

According to the media reports, the NNS activists came on three or
four bikes to the Ambedkar park, vandalized the statue of Mayawati and
fled the scene after they chipped off the head and hand with hammer..

The BSP leaders commenting on this said it was unfortunate and
alleged that it’s a reflection of anti-SC/ST sentiments, said media
reports.

Mayawati, during her regime in Uttar Pradesh have installed statues
of SC/ST/OBC icons, including hers, besides setting up several parks and
memorials.

The Mayawati government continued to build memorials of SC/ST/OBC icons
in Lucknow and Noida.
It was a Mayawati’s ”dream project.”

The statue was unveiled on July 25, 2009, by then Public Works Department minister Naseemuddin Siddiqui.

Police has detained three persons in connection with the incident.
Interestingly, the FIR has been lodged by the police in section 295 of
the Indian Penal Code (IPC) which prescribes two years imprisonment for
“damaging place of worship and things considered sacred by a group or
section of people”. The IPC Section 295 states “Injuring or defiling
place of worship with intent to insult the religion of any class.
Whoever destroys, damages or defiles any place of worship, or any object
held sacred by any class of persons with the intention of thereby
insulting the religion of any class of persons or with the knowledge
that any class of persons is likely to consider such destruction, damage
or defilement as a insult to their religion, shall be punished with
imprisonment of either description for a term which may extend to two
years, or with fine, or with both”.

An Untouchable MsMAYAWATI
IS NOW A LIVING DEITY. Police has detained three persons in connection vandalising Her statue.

The FIR has been lodged by the police in section 295 of
the Indian Penal Code (IPC) which prescribes two years imprisonment for
“damaging place of worship and things considered sacred by a group or
section of people”. The IPC Section 295 states “Injuring or defiling
place of worship with intent to insult the religion of any class.
Whoever destroys, damages or defiles any place of worship, or any object
held sacred by any class of persons with the intention of thereby
insulting the religion of any class of persons or with the knowledge
that any class of persons is likely to consider such destruction, damage
or defilement as a insult to their religion, shall be punished with
imprisonment of either description for a term which may extend to two
years, or with fine, or with both”. They must also be punished under Atrocities Act for practice of untouchability. No sooner a person sees an untouchable, he develops hatred along with anger which is nothing but madness. Hence they must be treated for madness in the hospital which the present CM wishes to build. Because larger number of such mad people are now in the present regime, it is ideal to build a mental hospital.

Now, it is the duty of the entire Sarvajan Samaj to dislodge the present inefficient govt. and install new statues in every nook and corner of UP for the LIVING DEITY, since she is fighting for the welfare, happiness and liberty of the entire people, the UP govt. must be asked to replace the existing vandalised statue to that of the size of the statue of liberty.