ALL ABOUT USA
Kentucky

This sutta is widely considered as a the main reference for meditation practice.


Note: infobubbles on all Pali words

Overhead View of the Kuthodaw and Sandamuni Pagodas


The history of the Pagoda is written up in stone in the compound and
here is a transcript (slightly corrected for spelling and diction):

1. On the full moon day of Nayon in M.E. 1229 [C.E. 1867] King Mindon
dismantled the temporary palace called Nanmyaebonthar and built a 100ft
pagoda in its place.

King Badon, the grandfather of King Mindon had a Buddhist statue cast
at Mingun. That image was made of 11,368 viss of iron and was entitled
âSandamuniâ, which means the image is graceful like the full moon.

It was moved from Amarapura and enshrined in the present [Sandamuni]
Pagoda. Thatâs why it is entitled Nanmyaebonthar Sannandawya Sandamuni
Pagoda meaning the pagoda as graceful as a fullmoon in the place of the
Nanmyaebonthar Palace.

2. In M.E. 1275 [C.E. 1913], in the compound of Sandamuni Pagoda,
Venerable Hermit U Khanti managed to inscribe Sutta, Vinaya and
Abhidhamma from [the] Tipitaka with [a] complete explanation (Atthakatha
and Tika) on 1772 stone slabs and a historical record was [also]
inscribed on an iron sheet and a stone slab.

3. These stone slabs are:

which altogether contains 891 slabs, and

All these pagodas are made of brick and called Dhammazedis. These pagodas contain records of [the] Buddhaâs teachings.

One thing that needs to be mentioned is that both the pagodas are
littered throughout, and there seems to be no proper maintenance
programme, and it struck me that maybe it is felt that, whereas there is
great merit in building these places, there is no merit in keeping them
clean.

But it is really striking to see such wonderful works as those at the
Kuthodaw and Sandamuni Pagodas, which hold the most sacred scriptures
of the tradition standing in a pile of rubbish, along with ciggie-buts,
betel-spit and all the rest of it. When walking around the small pagodas
one has to tread gingerly, because itâs not clear what one might be
putting oneâs foot down on.

Surely it cannot be beyond the wit of the authorities of the
respective temples to see that a proper cleaning programme would not
only pay respect to the Dhamma, but would also go to find employment for
those who might be otherwise unemployed, or under-employed. 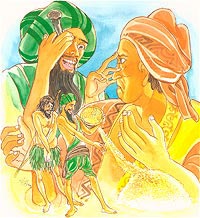 Verse 252. Easy To See Are The Faults Of Others

Otherâs faults are easy to see
yet hard it is to see oneâs own,
and so one winnows just like chaff
the faults of other people, while
hiding away those of oneâs own
as crafty cheat the losing throw.

Explanation: The faults of others are clearly observed. But
oneâs own faults are difficult to see. A person winnows the fault
of others into prominence, like chaff. He hides his own like the bird-hunter
who conceals himself with leaves and twigs.

Verse 252: It is easy to see the faults of others, but difficult to see one’s
own. A man broadcasts the fault; of others like winnowing chaff in the wind, but
hides his own faults as a crafty fowler covers himself.

1. Satho: a cheat, a gambler. According to the Commentary, it means a crafty
fowler.

The Story of Mendaka the Rich Man

While residing near the town of Baddiya, the Buddha uttered Verse (252) of
this book with reference to the renowned rich man Mendaka and his family.

Once, during his tour of Anga and Uttara regions, the Buddha saw in his
vision that time was ripe for Mendaka, his wife, his son, his daughter-in-law,
his granddaughter and his servant, to attain Sotapatti Fruition. Seeing the
prospect of these six people attaining Sotapatti Fruition, the Buddha went to
the town of Baddiya.

Mendaka was an extremely rich man. It was said that he found a large number
of life-size golden statues of goats in his backyard. For this reason, he was
known as Mendaka (a goat) the rich man. Again, it was also said that during the
time of Vipassi Buddha he had donated a monastery for Vipassi Buddha and a
congregation hall complete with a platform for the preacher. On completion of
these buildings he made offerings of alms-food to Vipassi Buddha and the
bhikkhus for four months. Then, in yet another of his past existences, when he
was a rich man in Baranasi, there was a famine throughout the region. One day,
they had cooked a meal just enough for the members of the family when a
paccekabuddha stood at the door for alms-food. Then and there he offered all the
food. But due to his great faith and generosity, the rice pot was later found to
be miraculously filled up again; so also were his granaries.

Mendaka and his family, hearing that the Buddha was coming to Baddiya, went
to pay homage to him. After hearing the discourse given by the Buddha, Mendaka,
his wife Candapaduma, his son Danancaya, his daughter-in-law Sumanadevi, his
granddaughter Visakha and the servant Punna attained Sotapatti Fruition. Mendaka
then told the Buddha how on his way, some ascetics had spoken ill of the Buddha
and had tried to dissuade him from coming to see him. The Buddha then said, “My
disciple, it is natural for people not to see one’s own faults, and to
exaggerate other people’s faults and failings.”

Furnace Mountain (temple name Kwan Se Um San Ji Sah) is an American Zen Buddhist retreat center in Clay City, Kentucky, co-founded in 1986 by Seung Sahn Soen Sa Nim and Dae Gak Soen Sa Nim as part of the international Kwan Um School of Zen;
it is now unaffiliated with the school in an official capacity. In 1990
the main Meditation Hall was completed, and in 1994 the temple was
constructed and opened. Kwan Se Um San Ji Sah is modeled after a
traditional Korean Buddhist Templeâlocated on 850 acres (263 ha) of woods in part of The Daniel Boone National Forest (in The Red River Gorge area). It is made of timber from the surrounding area (particularly Douglas fir siding and wood flooring). The exact site of Kwan Se Um San Ji Sah was determined by the use of geomantic divination, which was intended to help foster harmony. The Abbott and guiding teacher is Dae Gak Zen Master., 106[1][2][3]