WordPress database error: [Table './sarvajan_ambedkar_org/wp_comments' is marked as crashed and should be repaired]
SELECT ID, COUNT( comment_ID ) AS ccount FROM wp_posts LEFT JOIN wp_comments ON ( comment_post_ID = ID AND comment_approved = '1') WHERE ID IN (4581) GROUP BY ID

Your purpose in life is to find your purpose and give your whole heart and soul to it.

May you be blessed by Buddha on His birth anniversary!

Thousands of candles can be lighted from a single candle,

and the life of the candle will not be shortened.

Happiness never decreases by being shared.

Have a very happy Buddha Purnima

May Lord Buddha bless you with health, contentment and faithfulness!

Pay no attention to the faults of others, things done or left undone by others.

Consider only what by oneself is done or left undone.~ Gautama Buddha

May Gautama Buddha shower you with abundant fortune and prosperity;

immense happiness and contentment; and may you and find the path to eternal happiness!

May Lord Buddhaâs preachings for

help us to eradicate evil and suffering from this world.

May God shower his benign blessings on you and your family.

May happiness and peace surround you with his eternal love and strength.

This Vesak Buddha Jayanti may God bless us

and the entire humanity with her all best blessings.

Buddha Purnima: 16 inspirational teachings of Gautama Buddha that will change the way you live!

Gautama Buddha who laid the foundation of Buddhism has inspired millions of mind till today.


He was born in a royal family, but at the age of 35 he left the
palace to walk his own spiritual path. Meditating under a huge Bodhi
tree he became enlightened. He then spent his entire life inspiring
people to gain a happy perspective to life.


We bring to you 16 inspirational quotes by Lord Gautama Buddha that
will help you to achieve new perspective to life and help you free the
incarcerations of evil spirits.


When
a Scheduled Caste person is harassed, ill-treated and pained by upper
caste persons, it means that the SC is treading in the right path. This
is happening ever since manu divided the societies in 4 varnas as 1st,
2nd, 3rd, 4th rate athmas (Souls) and the SC/STs having no soul at all
so that they can do anthing they wished to do. But the Buddha never
believed in any soul. He said all are equal. The Chief Architect of our
modern Constitution Dr BR Ambedkar imbibed the same.

evening, he sentenced the Chief Justice of India JS Khehar and six Supreme Court judges
Dipak Misra, J Chelameswar, Ranjan Gogoi, MB Lokur, PC Ghose and Kurian
Joseph to five years of rigorous imprisonment, and imposed a fine of Rs
100,000 on each of them under the Scheduled Castes and Scheduled Tribes
(Prevention of Atrocities) Act of 1989 and the amended Act of 2015.
Karnan accused them of discriminating against him for being a Scheduled
Caste.

RSS Mohan Bagawat gang Modi and their chelas, chamchas,
slaves, bootlickers and the own mothers’ flesh eaters must also be
included along with the criminal judges. 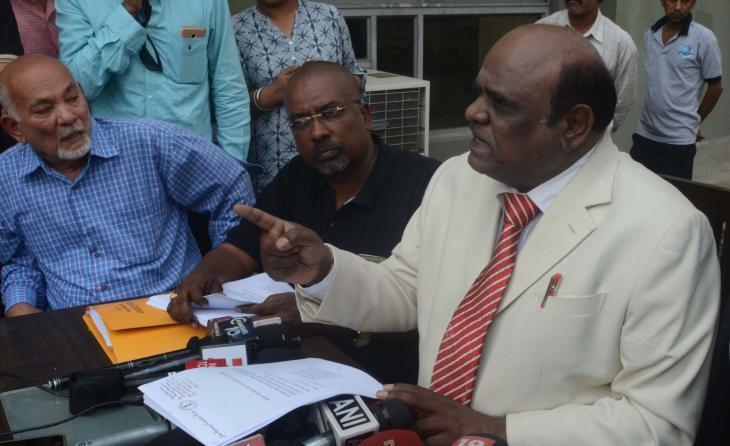 Justice Karnan: A courtroom drama that turned into TV soap
Judiciary is the institution that people look up to for justice.

“Justice has nothing to do with what goes on in a courtroom; justice
is what comes out of a courtroom.”

What has come out of courtrooms and straight into the common man’s
living room (via TV) is an unprecedented legal drama involving the
Indian judiciary.

In a never-happened-before order, the Supreme Court on Tuesday (May 9)
directed that Justice CS Karnan of Calcutta High Court be immediately
sent to jail for six months for contempt of court.

According to a PTI report, a seven-judge Constitution bench headed by
Chief Justice JS Khehar said, “We are of unanimous view that Justice
CS Karnan committed contempt of court, contempt of judiciary and the
process.” The bench â which included justices Dipak Misra, J
Chelameswar, Ranjan Gogoi, MB Lokur, PC Ghose and Kurian Joseph â said
that it is satisfied that Justice Karnan be sentenced for six months
in jail.

This is the first time that a high court judge is being sent to jail
by the Supreme Court on charges of contempt.

Interestingly, the bench also banned the media, both print and
electronic, from publishing the content of further orders, if passed
by Justice Karnan.

How it all began

The 62-year-old judge has been in news ever since he wrote an open
letter to the prime minister in January 23, where he had levelled
allegations of corruption against 20 judges.

Following his letter, the Supreme Court charged him with contempt on
February 8, and restrained him from exercising administrative and
judicial power. This was believed to be the first time a contempt
notice was issued to sitting judge.

In response, Justice Karnan said âthe characteristic of this order
clearly shows the upper caste judges are taking law into their hands
and misusing their judicial power by operating the same against a
SC/ST judge with mala fide intention of getting rid of himâ. When
asked by mediapersons, if he would appear before the SC on or before
the deadline (March 31), Karnan had said “Why? For what purpose? This
is a wrong order. It is out of law.”

On March 31, he, however, appeared before the Supreme Court in
connection with the contempt proceeding, again becoming the first high
court judge to do so in the history of Indian judiciary.

On Tuesday, Karnan, who is due to retire on June 12 this year, became
the first sitting judge in India’s judicial history to be sentenced to
a prison term.

supreme_court__050917023048.jpg
Justice Karnan became the first sitting judge in India’s judicial
history to be sentenced to a prison term.

A history of run-ins

On March 11, Karnan, according to this report in Hindustan Times, had
released his written allegations against two judges of the Madras High
Court. While he accused one of tampering records to get into service
and amassing wealth through unfair means, the other, he alleged, had
raped an intern.

Justice Karnan had made these allegations in 2013 and 2014 as well.

“I wrote to the chief justice of Madras high court but no action has
been taken against them. I brought specific allegations against 20
judges. But while those 20 are silent, a seven-member bench of the SC
issued a warrant against me. Today I openly admit that Indian
judiciary is corrupt,” Karnan said at a press conference he addressed
at his residence .

He had signed an order in front of the media, directing the CBI to
“register, investigate and file a report before the appropriate court
of law under Article 226 read with Section 482 CrPC to prevent abuse
of process of any court….”

“I am a sitting high court judge. Any place where I sit and pass an
order becomes the court,” Karnan said.

Justice Karnan reportedly has had frequent arguments with fellow
judges â both in the Madras High Court (where he was originally
elevated) and the Calcutta High Court, apart from the Supreme Court.

In 2011, Justice Karnan had accused a fellow high court judge of caste
discrimination because “the judge, who sat next to him, deliberately
touched him with his foot”.

In January 2014, Justice Karnan had told a division bench that the
selections of Madras High Court judges by the collegium were unfair
and that he would like to file an affidavit. The division bench was
apparently hearing a PIL regarding alleged unfairness of appointments
of Madras High Court judges, when Karnan suddenly chose to speak up.
He, however, abruptly walked out.

While his behaviour was dismissed by the Supreme Court as
uncharitable, it led to the Chief Justice of the High Court, Justice
Agarwal, writing a letter to the CJI requesting that Justice Karnan to
be transferred out since âhis brothers were scared of himâ.

In response, Karnan filed a complaint with the National Commission for
the Schedule Castes (NCSC) alleging caste discrimination.

When Justice Sanjay Kishan Kaul took over as Madras High Court Chief
Justice, Karnan once again launched a series of allegations against
several judges based on discrimination.

In May 2015, Justice Karnan publicly alleged in a letter to the CJI
that a brother judge had committed âcustodial rapeâ of one of his
legal interns.

Following the apex court February order, Karnan had “summoned” seven
Supreme Court judges, including the CJI to his “residential court”,
and accused them of caste discrimination.

evening, he sentenced the Chief Justice of India and
six Supreme Court judges to five years of rigorous imprisonment, and
imposed a fine of Rs 100,000 on each of them under the Scheduled
Castes and Scheduled Tribes (Prevention of Atrocities) Act of 1989 and
the amended Act of 2015. Karnan accused them of discriminating against
him for being a Dalit.

While all these developments have dealt severe damages to the image of
the judiciary, the controversy has also raised some uncomfortable
questions over not just its functioning, but judicial appointments as
well.

Apart from allegations of corruption against sitting judges, the
Calcutta High Court judge also raised the issue of caste
discrimination.

The hearing comes a day after Justice Karnan, who is facing contempt
proceedings in Supreme Court for making scandalous corruption
allegations against its sitting and retired judges passed another…
livelaw.in

Many legal luminaries now believe the case clearly proves that the
process of judicial appointments needs an overhaul and judges too
should be made accountable to the people â any authority that wields
power must be accountable as well.

Courtroom battles do make for some of the most interesting dramas,
especially onscreen, but it shouldn’t come at the cost of the
judiciary’s reputation because it’s the same institution that people
look up to for justice.

Justice Karnan: A courtroom drama that turned into TV soap
Judiciary is the institution that people look up to for justice.
dailyo.in
https://www.youtube.com/watch?v=E59bu5UsVbo

Published on May 9, 2017
Justice
CS Karnan was today sentenced to six months jail by the Supreme Court,
which held him guilty of contempt and ordered the Kolkata police chief
to arrest him. The court also banned the media from highlighting Justice
Karnan’s statements and “orders”.

NDTV is one of the leaders in
the production and broadcasting of un-biased and comprehensive news and
entertainment programmes in India and abroad. NDTV delivers reliable
information across all platforms: TV, Internet and Mobile.

WordPress database error: [Table './sarvajan_ambedkar_org/wp_comments' is marked as crashed and should be repaired]
SELECT COUNT(comment_ID) FROM wp_comments WHERE comment_post_ID = 4581 AND comment_approved = '1';

WordPress database error: [Table './sarvajan_ambedkar_org/wp_comments' is marked as crashed and should be repaired]
SELECT COUNT(*) FROM wp_comments WHERE comment_post_ID = '4581' AND comment_approved = '1'