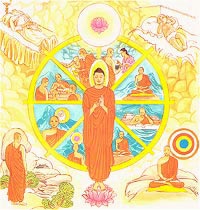 Verse 273. The Eight-fold Path Is Best
Of paths the Eight-fold is the best,
of truths the statement four,
the passionless of teachings best,
of humankind the Seer.
Explanation:
Off all paths, the eight-fold path is the greatest. Of the truths, the
greatest are the four noble truths. Detachment is the greatest of all
states. And, of all those who are two-footed ones, one who possesses
eyes. The Buddha is the greatest. 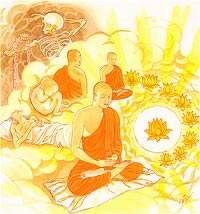 Verse 274. The Only Path To Purity
This is the path, no otherâs there
for purity of insight,
enter then upon this path
bemusing Mara utterly.
Explanation:
This is the path. There is no other for the achievement of clarity of
insight. You must follow this path to the total bewilderment of mara. 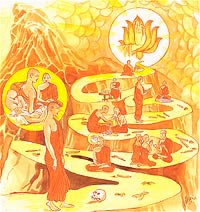 Verse 275. The Path To End Suffering
Entered then upon this path
youâll make an end of dukkha.
Freed in knowledge from sufferingâs stings
the Pathâs proclaimed by me.
Explanation:
If you follow this path, you will reach the termination of suffering.
This path has been revealed by me, after the extraction of arrows.
Verse 276. Buddhas Only Shows The Way
Buddhas just proclaim the Path
but youâre the ones to strive.
Contemplatives who tread the Path
are freed from Maraâs bonds.
Explanation:
The effort must be made by yourself. The Buddhas (the Teachers) only
show the way and direct you.Those contemplative meditators, who follow
the path, fully and totally escape the snares of death. 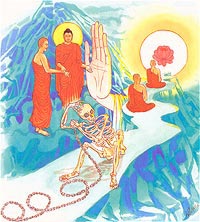 Verse 277. Conditioned Things Are Transient
When with wisdom one discerns
transience of conditioned things
one wearily from dukkha turns
treading the path to purity.
Explanation:
All component things, all things that have been put together, all
created things are transient, impermanent, non-constant. When this
realized through insight, one achieves detachment form suffering. This
is the path to total freedom from blemishes. 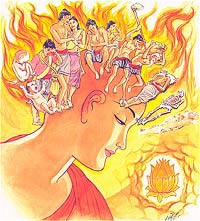 Verse 278. All Component Things Are Sorrow
When with wisdom one discerns
the dukkha of conditioned things
one wearily from dukkha turns
treading the path to purity.
Explanation:
All component things - all things that have been put together - all
created things are sorrow-fraught. When this is realized through
insight, one achieves detachment from suffering. This is the path to
total freedom from suffering. 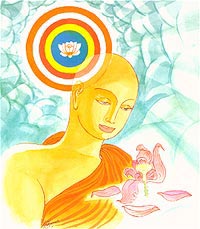 Verse 279. Everything Is Soul-less
When with wisdom one discerns
all knowables are not a self
one wearily from dukkha turns
treading the path to purity.
Explanation:
All states of being are without a self. When this is realized through
insight, one achieves detachment from suffering. This is the path of
total freedom from suffering. 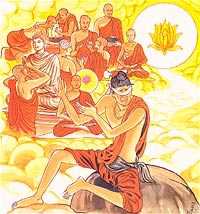 Verse 280. The Lazy Miss The Path
Though time to strive, not striving,
while young and strong yet indeed,
weak-minded and irresolute:
one finds not wisdomâs way.
Explanation:
If an individual does not make an effort even at a time when exertion
is due, if a person is lethargic even when he is young and strong; if a
person suppresses the wholesome thoughts that arise in his mind, if he
is lazy, he will not find the path to wisdom. 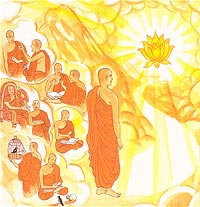 Verse 281. Purify Your Thoughts, Words And Deeds
In speech ever watchful with mind well-restrained
never with body do unwholesomeness.
So should one purify these three kamma-paths
winning to the Way made known by the Seers.
Explanation:
If one is well-guarded in speech, well-restrained in mind, and if one
refrains from physical misdeeds, that person will certainly attain the
noble eight-fold path realized by the sages. 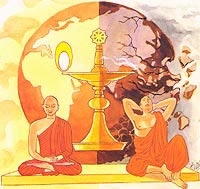 Verse 282. Way To Increase Wisdom
From endeavour wisdom springs,
lacking effort wisdom wanes:
having known this two-fold path
either to progress or decline
so should one exhort oneself
that wisdom may increase.
Explanation:
From reflection and concentrated meditation refined wisdom arises.
Through the non-practice of concentrated wisdom erodes. Once these two
paths - one leading to progress and the other to decline - are
recognized, one must conduct oneâs self to increased wisdom. 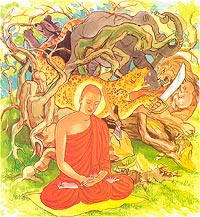 Verse 283. Shun Passion
The wood cut down but not a tree
since itâs from wood that fear is born.
Having cut wood and woodedness
O bhikkhus be without a wood.
Explanation:
Monks, cut down the forest of defilements. But, do not cut down the
trees. Fear comes from the forests of defilements. Clear both the forest
and the undergrowth. Having done this achieve the state of Nibbana. 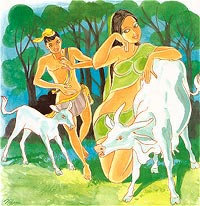 Verse 284. Attachment To Women
As long indeed as woodedness
of man to women is not cut
so long in bondage is oneâs mind
as milch-calf to the mother cow.
Explanation:
As long as a manâs mind is attached to women, even minutely, like a
little undergrowth that has not been cut down, so long will his mind be
attached like a suckling calf to its mother cow.

Verse 285. Path To Peace
Cut off affection for oneself
as a hand a lily in the Fall.
Cultivate this peaceful path,
Nibbana by the Buddha taught.
Explanation:
Just like a person plucking out a lily with oneâs own hand, pluck out
your self-attachment. Cultivate the path to Nibbana, as advocated by the
Buddha. 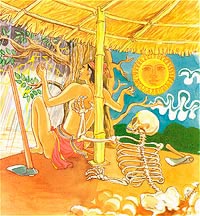 Verse 286. The Fear Of Death
Here shall I spend the Rains,
here the Winter, here the Summer.
Thus speculates the fool,
the danger he knows not.
Explanation:
In the four months during retreat, winter or summer in a chosen place,
the ignorant plans unaware of the threat of death. 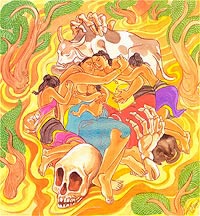 Verse 287. Death Takes Away The Attached
For one who has a clinging mind
and finds delight in babes and herds
Death does seize and carry away
as great flood a sleeping village.
Explanation:
Men are proud that they process children, cattle and other forms of
wealth. They tend to be proud that way because their minds are overcome
with blemishes. Floods sweep away a sleeping village, taking along all
its people and their possessions. In the same way, death comes unaware
and sweeps along the people however proud they are of their possessions. 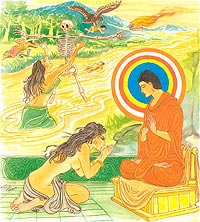 Verse 288. No Protection When Needed
No sons are there for shelter
nor father nor related folk,
one by the Death-king seized upon
in kin no shelter finds.
Explanation:
When and individual is gripped by death, sons cannot protect one. Not
even oneâs father can shield a person from the grip of death. Nor can
oneâs relations come to the rescue. 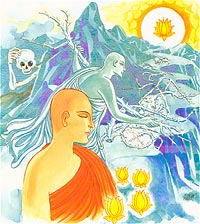 Meeting of Team Managers Team Managers meeting for all disciplines will be held at the venue on 25th of November 430pm.
C)
Warm Ups: Warm ups will be allowed at the main competition pool and
also at the adjoining small swimming pool before the commencement of the
swimming sessions (Heat/Finals).
D) Time Trials: All Events will be held on time Trials basis.
E)
Victory Ceremonies: Victory Ceremonies will be held. All winners
should come and report to victory ceremony area immediately when called.
Order of Events: Event will begin at 9am everyday and will run till
the completion of all events without break on that day.
Day 1
1. 100 Free Style
2. 50 Breast Stroke
3. 100 Butter Fly
4. 200 IM
5. 4 x 50 MD Relay
Day 2
1. 50 Free Style
2. 100 Back Stroke
3. 100 Breast Stroke
4. 400 Free Style
Day 3
1. 200 Free Style
2. 50 Butter Fly
3. 50 Back Stroke
4. 4 x 50 FS Relay
Important Telephone Numbers:
1. Convenor: Rohit: 9844462077
(M Satish Kumar) (Organising Secretary)

youtube.com
Fina world Masters 2017
100m freestyle man 25-29
I am J Chandrasekharan staying at Just booked! Can’t wait to check into Capital O 71598 Sai Arya Residency. https://www.oyorooms.com/99953/?utm_source=webShare…
I hope our team meet tomorrow 26-11-2021.
. Create Free online episodes on Buddhaâs teachings in His own words for the
welfare, happiness, peace by ending suffering of all aboriginal awakened
societies and for them to attain eternal bliss as their Final Goal.

https://youtu.be/JnCpm_CDg60
https://www.google.co.in/…/how-to-be-mindful-while…
How to Be Mindful While Swimming
âSwimming
often devolves into autopilot behavior in which you focus only on
getting in the distance youâve planned, or âfollowing the black line.â
This is a lost opportunity. Swimming can also be an immensely rewarding
opportunity to practice mindfulness. By swimming mindfully, we can
transform routine lap sessions into an immersive form of moving
meditation.â â Terry Laughlin, founder of Total Immersion Swimming.
Begin each swim with an intention to be fully present in the water, rather than to just get laps in.
As
you begin swimming, focus on each stroke. Notice the feeling of the
wetness on your skin. Feel yourself â buoyant â moving through water.
Focus
on your breath. As you take breaths, shift your focus from a stroke
rhythm to a breathing rhythm, noticing the unbroken alternation of
in-breaths and out-breaths. How does your body accommodate to this
rhythm?
Align
head and spine. Visualize being towed forward by a line attached to the
top of your head, so your head and spine are both lengthening and
always moving in the direction you want to travel.
As
you continue with your strokes, focus on the feeling of your arms
entering and leaving the water. Feel the cool, dry air on your arms
briefly; then the wet thickness of the water for a longer period of
submersion.
Listen to the sounds of swimming. Hear the splashes, the bubbles and your own breath. How quietly can you swim?
Continue your strokes, noticing how far your arms are reaching in front of you, striving to feel âtallerâ with each stroke.
As you complete your swim, be grateful for your ability to merge mind and body, moving like water.
Comments
My doctor

advised me to try swimming to avoid a slip disc operation. I tried and
it helped me. Iâm now practising mindful swimming. The swimming

pool is my hospital and a meditation

centre.-JC
After
serving in Iraq for 3 years, swimming was the only way I could relax
when I came back. The requirement to breathe brought oxygen back into my
brain, which was still in a constant state of hypervigilance. The
coolness of the water replenished my parched body. The blue color of the
water dazzled my eyes after seeing nothing but brown. And the rhythmic
motion and quiet splashing gently brought peace and calm into my body.
Pure healing.-SEB
Arizona
July 23, 2017
If
you want to swim well, you are always thinking about breath, stroke,
alignment, etc. Ask anyone, coach or swimmer, in a master’s swim
program. Or anyone in any formal swim program for that matter. BTW, the
black line, interval, pace, completing the set, minding the time clock,
all require mindfulness.
Arguably,
anything you want to do well required mindfulness. For example, if you
play a musical instrument, you have to be mindful of (pay attention to)
intonation, timing, dynamics, etc.
-em
ny
May 30, 2017
In
Murcia Spain we swim.for meditation and against the clock .teacher is a
backstroke medalist yoga expert.we sing outloud while doing 3K or
silently…Rockefeller once said. ” he who dies having done the most
laps wins. “.-murcia.es
murcia
May 26, 2017
Laughlin’s Total Immersion swimming is one of the best things I have learned in years. Loving that water!-Mark Muhich
Jackson MI
May 26, 2017