WordPress database error: [Table './sarvajan_ambedkar_org/wp_comments' is marked as crashed and should be repaired]
SELECT ID, COUNT( comment_ID ) AS ccount FROM wp_posts LEFT JOIN wp_comments ON ( comment_post_ID = ID AND comment_approved = '1') WHERE ID IN (6214) GROUP BY ID

Dear friends in the press,

In the light of the repeated hate speech by election campaigners of the
BJP, using fear of rape as a campaign message, and urging their
followers to inflict violence on peaceful women protesting against the
CAA-NRC-NPR, 175 womenâs groups and individuals today sent an open
letter to the Prime Minister. They reminded him of his Constitutional
duty to protect all citizens and called upon him, and his party, to
fight the elections in a manner that upholds the Constitution, not one
that increases the fear and insecurity among women!

VOTE FOR BJP OR YOU WILL GET RAPED? IS THIS YOUR MESSAGE TO DELHI’S WOMEN?
YOUR PARTY IS ALSO EXHORTING MOBS TO AIM BULLETS AT WOMEN & CHILDREN.

PLEASE STOP YOUR PARTY FROM THREATENING WOMEN WITH VIOLENCE.
FIGHT THE ELECTION UPHOLDING THE DIGNITY OF OUR CONSTITUTION.

We speak to you as women of this country, and the women of Delhi â
Hindu, Muslim, Christian, Sikh, Adivasi and Dalit â who are horrified at
the atmosphere of violence against women that members of your party
have created merely to try and win an election.

Â· When Mr.
Anurag Thakur, a sitting Minister in the central government exhorts a
crowd to yell âGoli maaron saalon koâ, please remember that in this case
the âsaalonâ is lakhs of peacefully protesting women, sitting in parks
and maidans across the city, with young children on their laps.

Â·
Another campaigner for your party, Chief Minister of Uttar
Pradesh, Ajay Singh Bisht aka âYogi Adityanathâ kicked off his campaign
in Delhi by saying âBoli se nahi to goliâ se maanenge!

Â·
When the esteemed Home Minister, Mr Amit Shah asks people to push the
EVM button on 8 February with such force âthat protesters feel the
currentâ. Is he wishing to electrocute the women?

Is the BJP now
openly endangering the lives of Indiaâs women and children? This is what
history will record and India will not forgive, Mr. Prime Minister. For
the nation saw the direct result of this violent atmosphere created by
members of your party, which inspired âRam Bhaktâ Gopal to open fire at
innocent students in Jamia on January 30th, and another terrorist
weaponised by the hate being spread by your party, fired at the women of
Shaheen Bagh on 1st February.

Â· Mr. Parvesh Verma, your
party MP said, âLakhs of people gather there (Shaheen Bagh). People of
Delhi will have to think and take a decision. Theyâll enter your houses,
rape your sisters and daughters, kill them.â

What is this kind
of communal hate and fear mongering that you, as head of government are
encouraging, that seeks to make women of all communities feel more
insecure and threatened? Vote for BJP or you will get raped! Is this
your election message to Delhiâs women? Is this how low your party has
sunk?

Women understand the meaning of rape, Mr. Prime Minister.
We have long suffered violence on our bodies, with little access to
justice, despite your governmentâs slogan of Beti Bachao! We condemn
this attempt to demean our histories of pain and fear by using it for
cheap, divisive electioneering.

We do not fear the Shaheen
Baghs of Delhi, Mr. Prime Minister. What we fear is a government that
directs its security forces to attack peacefully protesting students,
women and men. Elected members who openly threaten ordinary citizens.
And a police force that stands by and watches as people inspired by this
hate-filled rhetoric indulge in acts of violence.
Your government
may disagree with the reasons for this nation-wide uprising against the
NPR-NRC-CAA. But peaceful protest is our constitutional right. That is
all we are doing. Lakhs of Delhiâs women are not just part of this
movement, they are leading it. Empowered women are on the frontlines. We
will not be silent when women are labelled terrorists and traitors,
when all they are doing it fighting to protect and preserve the
Constitution of our country.

Mr Prime Minister, you may belong to
BJP, but you are the Prime Minister of the country and have a
Constitutional obligation to protect the rights of all citizens. When
members of your party exhort mobs to use violence and bullets and you
remain silent or support them, remember it is you who are responsible.

Â· You need to speak out against such targeted violence and hate speech
Â· You need to take immediate action,including under all relevant
criminal provisions of the penal code, against these violence mongering
members of your party.
Â· You need to fight the Delhi election
in a manner that upholds the dignity of our Constitution and ensures the
security of Indiaâs women. 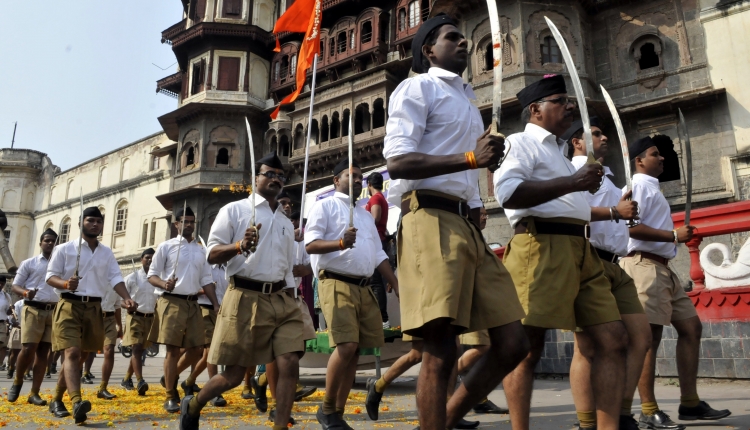 Founded in 1925, the RSS took
direct inspiration from the European fascist movements of the
1920s-1940s, including the Nazi Party. Today, it has metastasized into a
6 million + member uniformed and armed paramilitary. The RSS is
responsible for acts of gross violence, including participating in every
major pogrom in independent India. We are calling on the US State
Department to declare the RSS a terrorist organization.

The RSS is infamous for its members dressing in uniforms which
strongly resemble those worn by members of the Hitler Youth. It was
founded in 1925, the same year that the Nazi party was reformulated with
Hitler as its leader. In addition to drawing inspiration from the
Nazis, the RSS modeled itself after Mussoliniâs fascist movement in
Italy.

In 1931, RSS co-founder BS Moonje met Mussolini in Rome. After
praising the dictator’s fascist youth group, ONB, for its “military
regeneration” of Italian youth, Moonje wrote, âIndia and particularly
Hindu India need some such institution for the military regeneration of
the Hindus.â He claimed that “the idea of fascism vividly brings out the
conception of unity amongst people” and declared: âOur institution of
Rashtriya Swayamsewak Sangh of Nagpur under Dr Hedgewar is of this
kind.â

The longest-serving RSS chief, M.S. Golwalkar, called it treason for
an Indian to convert away from Hinduism or refuse to “glorify the Hindu
Race and Nation.” In 1939, he also wrote glowingly in support of Nazi
racial policy: âTo keep up the purity of the race and its culture,
Germany shocked the world by her purging the country of the Semitic
races â the Jews. Race pride at its highest has been manifested here.â
He called this âa good lesson for us in Hindustan to learn and profit
by.â

In its June 2019 report, the United States Commission on
International Religious Freedom warned that the RSSâs agenda âto
alienate non-Hindus or lower-caste Hindus is a significant contributor
to the rise of religious violence and persecution.â

The RSS has been repeatedly accused of instigating violence. It has
been banned several times, the first time following the assassination of
M.K. Gandhi by a former RSS member.

In 2002, Human Rights Watch named the RSS and its subsidiaries as the
groups responsible for an anti-Muslim pogrom that killed 2,000 in the
Indian state of Gujarat. In 2012, Swami Aseemanand, a full-time RSS
worker, confessed to orchestrating several terrorist bombings which
claimed hundreds of lives from 2006 to 2008. Many other instances of
bombings, assassinations, and pogroms have been laid at the feet of the
RSS.

We, the undersigned, call on
the US State Department to give the RSS a “Foreign Terrorist
Organization” designation with due haste.

WordPress database error: [Table './sarvajan_ambedkar_org/wp_comments' is marked as crashed and should be repaired]
SELECT COUNT(comment_ID) FROM wp_comments WHERE comment_post_ID = 6214 AND comment_approved = '1';

WordPress database error: [Table './sarvajan_ambedkar_org/wp_comments' is marked as crashed and should be repaired]
SELECT COUNT(*) FROM wp_comments WHERE comment_post_ID = '6214' AND comment_approved = '1'