WordPress database error: [Table './sarvajan_ambedkar_org/wp_comments' is marked as crashed and should be repaired]
SELECT ID, COUNT( comment_ID ) AS ccount FROM wp_posts LEFT JOIN wp_comments ON ( comment_post_ID = ID AND comment_approved = '1') WHERE ID IN (5208) GROUP BY ID


Sent from my iPhone

New Delhi: The BSP and the JD(S) on Thursday
announced that they are entering into an alliance to contest the
Karnataka Assembly polls together.


The alliance would continue in the 2019 Lok Sabha elections as well,
Satish Chandra Misra of the Bahujan Samaj Party and Danish Ali of the
Janata Dal (Secular) said at a press conference.


The term of the 224-member Karnataka Assembly ends in May. 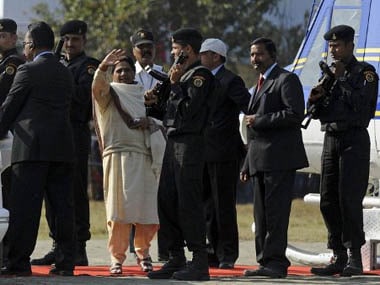 
The BSP will be contesting from eight reserved and 12 general
Assembly constituencies spread across 14 districts of the state. The
JD(S) will fight for the remaining 204 seats, aiming to form government
under the leadership of JD(S) state chief HD Kumaraswamy, the leaders
announced.

The national presidents of both
parties, HD Deve Gowda and Mayawati, will launch a joint campaign for
the Assembly polls on 17 February from Bengaluru.


Describing it as a “path breaking” move, Ali said the alliance would have larger ramifications for Indian politics.

It had the potential to “thwart attempts of two bigger national parties to isolate regional parties”, he said.


“This is the first time that the BSP, under the leadership of
Mayawati, is getting into an electoral alliance with us as per our
request.” He added that the BSP had a strong base in the state, which
had over 22 percent Scheduled Caste votes.


Asked about BSP’s hold in Karnataka, Misra said the party had scored well while fighting independently in several
constituencies. “We had representation in the Karnataka Assembly in
1999. BSP has performed well even in states like Telangana, Gujarat,
Maharashtra and Jammu and Kashmir,” he said.

The Janata Dal-Secular (JD-S)
on Saturday held a rally on the city’s outskirts ahead of the Karnataka
Assembly elections in late April or early May and accused both the
Congress and BJP of failure to serve the state’s people.JD-S supremo and
former Prime Minister H.D. Deve Gowda, party Working President and
former Chief Minister H.D. Kumaraswamy and Bahujan Samaj Party supremo
Mayawati, with whose party the JD-S is in alliance for the polls, spoke
on the occasion and urged the people to vote the regional party to
power.”We are positioning our party as an alternative to the two
national parties, the Congress and the BJP, which have failed to serve
the state’s people and at the national level,” Kumaraswamy said in his
speech.Charging the Congress and the Bharatiya Janata Party of failing
to govern the southern state during their rule in the past, the JD-S
leader claimed people were fed up with both the national parties as they
were “most corrupt, myopic and stalled the state’s development”. “We
will waive all loans of farmers if elected to power and provide jobs for
locals in thousands,” Kumaraswamy said.The JD-S was in power in the
state from May 2005 to October 2007, first with the Congress support for
about 20 months till February 2006 and later with the BJP support for
another 20 months.The JD-S and BSP entered into a poll pact in New Delhi
on February 8 to prevent what they called division of secular votes and
take on the ruling Congress and opposition BJP in the elections to the
225-member Assembly.The BSP will contest about 20 reserved
constituencies but campaign jointly for candidates of both parties.The
JD-S, which has 40 lawmakers in the outgoing Assembly, secured 20 per
cent vote in the 2013 Assembly polls as against 36.5 per cent by the
Congress. –IANSfb/tsb
(This story was auto-published from a syndicated feed. No part of the
story has been edited by The Quint.)

HD Kumaraswamy expresses confidence in JD(S)-BSP alliance… the grand
alliance will give a new message to the entire country… says the JD(S)
state supremo….

The grand allinace between the JD(S) and the
BSP is now a reality. JD(S)’ Vikasa Parva rally served as a stage for
political bigwigs like HD Deve Gowda, HD Kumaraswamy and BSP Supremo
Mayawati. HD Kumaraswamy who spoke during the rally said the grand
alliance would serve as a role model to other political alliances and
that it would give a new message to the entire political system.
Category
News & Politics

Let us be very clear about this patriotic crap. Even if some guy had
mouthed ‘anti-national slogan’, he cannot be punished in a free society.
Swaminathan Aiyar’s brilliant article (apart from scores of others by
eminent writers) makes it abundantly clear. Demanding a separate state
is not a crime in a democracy. Examples galore in UK, France, Spain,
Canada etc. Modi, Amit Shah, Rajnath, Manusmriti, Nalin Kholi, Sambit Patra, Arnab Goswami etc receive a mouthful from Aiyar.

Quote: “The current rant against ‘anti-national’ slogans at JNU
highlights âthe abundance of scoundrels among politicians and television
anchors.

Hats off to you, Aiyar.

Another guy shouted in a public
place, “Give me weapon. I want to fight this nation.” He was arrested
and prosecuted. Judges asked whether he received weapons and had he
fought. Prosecution said, “No”. Case was dismissed.

Modi
(Murderer of democratic institutions) Toadis and Bhakts after gobbling
the master Key by tampering the fraud EVMs for the stealth,shadowy,
discriminatory hindutva cult of just 1% intolerant, cunning, crooked,
number one terrorists of the world, violent, militant, ever shooting,
lynching, lunatic, mentally retarded chitpavan brahmin RSS (rakshasa
Swayam Sevaks) who believe that the chitpavan brahmins are 1st rate
souls (athmas), the kshatrias, Vyshias,shudras as 2nd, 3rd, 4th rate
souls and the Aboriginal Inhabitants SC/STs/ OBCs/ Converted Religious
Minorities as having no soul at all so that they can commit any harm to
them, but the Buddha never believed in any soul and said all are equal,
should ask their netas not to concentrate on Nautankis which will not
sell any longer. The real fact is that the chitpavan brahmins are
foreigners and anti-nationals.
=== === ===
JNU stir: Why âanti-nationalismâ is an empty abuse that has no place in a free society

JNU stir: Why âanti-nationalismâ is an empty abuse that has no place in a free society
Patriotism
is the last refuge of the scoundrel. The current rant against
âanti-nationalâ slogans at Jawaharlal Nehru University (JNU) highlights
the abundance of scoundrelsâ¦
blogs.economictimes.indiatimes.com

WordPress database error: [Table './sarvajan_ambedkar_org/wp_comments' is marked as crashed and should be repaired]
SELECT COUNT(comment_ID) FROM wp_comments WHERE comment_post_ID = 5208 AND comment_approved = '1';

WordPress database error: [Table './sarvajan_ambedkar_org/wp_comments' is marked as crashed and should be repaired]
SELECT COUNT(*) FROM wp_comments WHERE comment_post_ID = '5208' AND comment_approved = '1'